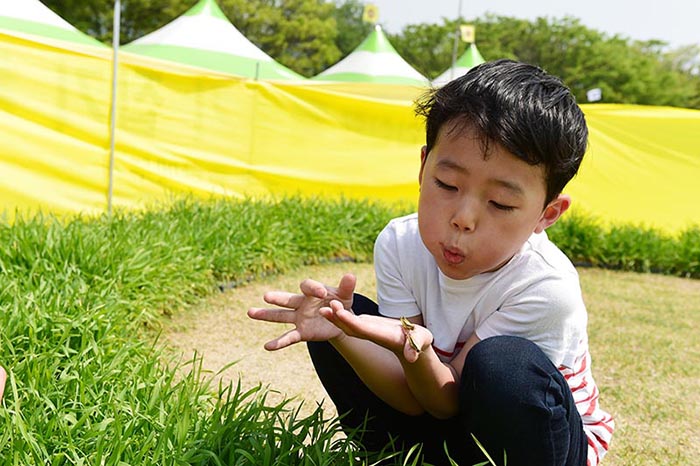 The county announced on September 12 that it was initiating a project to develop grasshopper tourism. Through the project, county officials are hoping to nurture the insect industry and promote insect farming, which is rapidly increasing in popularity.

Using insects to promote tourism isn’t new. Hampyeong County, one of Jangseong’s neighboring counties, has been hosting the Hampyeong Butterfly Festival since 1999. Muju County in North Jeolla Province is known for the Muju Firefly Festival.

In addition, insect farming is seen as an alternative to traditional animal farming, as insects produce high quality protein.

According to the Food and Agricultural Organization of the United Nations, “Insects have a high food conversion rate. For example, crickets need six times less feed than cattle, four times less than sheep, and twice less than pigs and broiler chickens to produce the same amount of protein.”

Jangseong County is planning to incorporate the remedial and educational aspects of insect farming to develop partnerships with schools.

According to a 2014 study by the Plant Medicine Department at Chungbuk National University, raising insects as pets and using them for therapeutic purposes are effective means to advance self-esteem, quality of life and emotional health.

“We will develop a therapy program that uses children’s curiosity to improve their mental health,” said an official at Jangseong’s Agro-Technology Center.

“It will help the insect industry as a whole.”