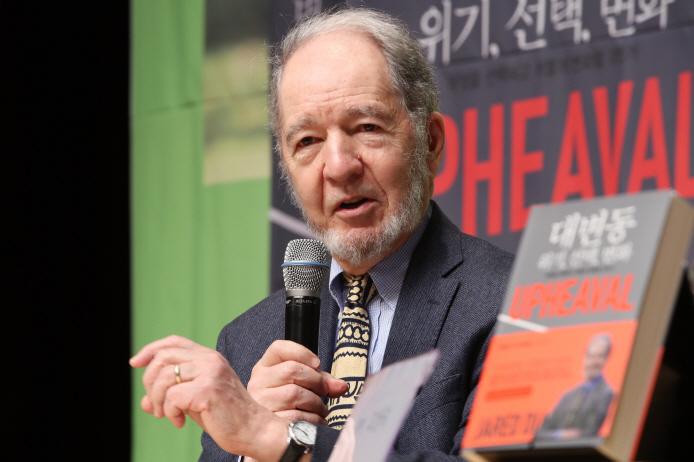 Jared Diamond speaks during a press conference in Seoul on Oct. 31, 2019. (Yonhap)

SEOUL, Oct. 31 (Korea Bizwire) — Japan needs to apologize to South Korea in a “convincing” manner over its past wrongdoings as Germany did to Poland, renowned American professor and author Jared Diamond said Thursday.

His suggestion came as South Kore and Japan are trapped in one of the worst diplomatic rows in their modern bilateral relations.

Since July, Japan has imposed export curbs and removed South Korea from its list of trusted trade partners in apparent retaliation against the South Korean top court’s rulings last year in favor of Koreans who were enslaved into forced labor under Japan’s 1910-45 colonial rule of Korea.

“It is a tragedy for both Japan and South Korea that they have not developed better relationships. You should have better relationships,” Diamond, who won the 1998 Pulitzer Prize for general nonfiction with “Guns, Germs and Steel,” said in a press conference in Seoul.

“You have the same enemies. Both of you are threatened by China and North Korea,” he said, suggesting that Japan needs to apologize to South Korea convincingly in order to be able to mend ties.

Instead of directly addressing Japan, the professor recalled a similar historic case between Germany and Poland and how former German Chancellor Willy Brandt’s convincing apology resolved the Poles’ spite.

“Until 1970, German apologies consisted of reading something written, with no emotions. It was completely unconvincing,” according to Diamond.

But during his visit in 1970 to the Warsaw Ghetto, the site of a deadly Jewish uprising against the World War II German occupation, Willy Brandt made a historic apology.

“Willy Brandt was so moved. So he threw away his speech and he fell down to his knees … he acknowledged Germany’s crimes against the Polish people and he begged the Poles for forgiveness,” he described.

“It was spontaneous, emotional and convincing,” he stressed.

Following the apology, Germany also began to teach its children the history of atrocities in school.

“Today, Poland has no doubt Germany had apologized. So Germany’s relations with Poland are good,” he said, emphasizing that, “That’s what Japanese need for Korea.”

At 82, Diamond is currently a geology professor at UCLA, and his 2019 publication, “Upheaval,” was translated into nearly 30 languages, including Korean.

The translated Korean version by the Gimmyoung publishing house was published simultaneously with the original English edition.

Speaking about South Korea, Diamond picked out North Korea as the biggest problem facing the country.

Asked how to tackle the problem, he said South Korea and the United States need to constantly engage North Korea in “private,” off-the-record discussions.

He pointed out the pattern of discussions and negotiations among the leaders of the three nations, followed by public announcements and reports.

“I think it would be better if there were instead constant, private discussions with no announcements … not only between the leaders but between officials of all levels,” Diamond said.

“Maybe you could find out what North Korea really wants and what you could do to make North Korea feel more comfortable and less threatened and wouldn’t discuss in public,” he suggested.

He also advised South Korea to perform a “balancing act” between the United States and China, rather than taking one side amid the two superpowers’ growing rivalry for hegemony.

During the conference, Diamond also expressed his special love of Korea and its writing system, Hangeul.

He also confessed his routine visits to South Korea, where he stockpiles anniversary presents for his wife to be dispensed over a period of five years.