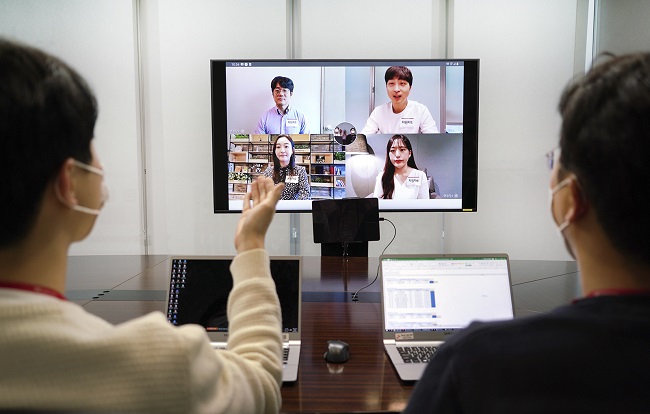 SK Telecom will use the company’s own video conference solution to carry out the interviews. (image: SK Telecom)

South Korea’s leading mobile carrier announced Wednesday that it will introduce an ‘interactive untact’, or in-tact, interview session for all applicants hoping to land a job during the company’s June recruiting session.

The ‘in-tact’ interviews will involve multiple interviewees exchanging comments and opinions during the session.

SK Telecom will use the company’s own video conference solution to carry out the interviews.

“When it comes to a large conglomerate introducing a multi-person interview session using its own video solution, SK Telecom is the first,” a company source said.

The company focused on ‘fairness’ as it prepared for the interviews.

Interviewees will receive an ‘in-tact interview kit’, comprising two tablet devices – one for the video conference and the other one for looking at documentation – as well as a tablet holder and a guidebook a week prior to the interview.

All interviewees will be able to participate in the interview using the same type of device and under the same online environment. Connection tests and other checks will be conducted twice before the interview starts.

SK Telecom will offer unlimited data support to prevent interviewees from being shut out from the session due to data shortages.

The tablets has the company’s own security software known as SSM (Smart device Security Management) installed, which effectively prevents users from leaking any information. The tablets cannot be used for purposes other than the interview.

“We are aiming for a full-HD quality video conference interacting with multiple interviewees, which will allow us to assess them from various aspects.”

Once the interviews are over, interviewees will be asked to put the kits into a separate box provided by the company and leave it outside of their front door. The company will be in charge of carrying out the rest of the return process.