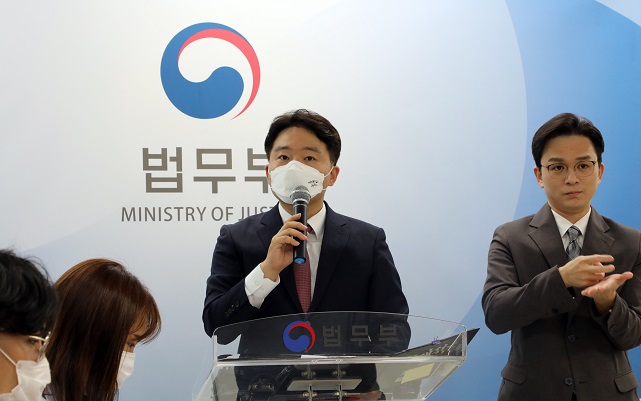 Choung Jae-min, the justice ministry’s legal counsel, talks during a briefing at an office of the Ministry of Justice in Seoul, on Sept. 6, 2021. (Yonhap)

SEOUL, Sept. 6 (Korea Bizwire) — The Ministry of Justice said Monday it plans to revise a law to allow a single person to legally adopt a child, as single-member households are becoming the country’s most common living arrangement.

The ministry’s task force, aimed at making policies friendlier toward single-person households, has recently agreed to amend the Civil Code so that an unmarried person can adopt a child if conditions are met.

Under the current law, only a married couple can legally adopt a child by mutual consent.

The decision was made after taking into consideration that “there are many single people who can raise a child as well as a married couple and adoptive parents can become single again at some point of their lives following a divorce or the death of a spouse,” the ministry said in a statement.

“The current system can only consolidate social prejudice against a certain type of family.”

At the same time, the ministry affirmed “the need to thoroughly verify the credentials of would-be adoptive parents.”

“We are working to delete the clause” mandating that an adoption can be done by a married couple, Choung Jae-min, the justice ministry’s legal counsel, said during a briefing.

“We believe that a family court should be able to determine a specific adoption case,” he added.

According to the 2020 census by Statistics Korea released in July, about 3 in 10 households in Korea were one-person households last year.

The proportion of single-member households accounted for the largest share of 31.7 percent last year, up 1.5 percentage points from the previous year. It more than doubled from 2005, when the percentage of such households came to 15.5 percent.