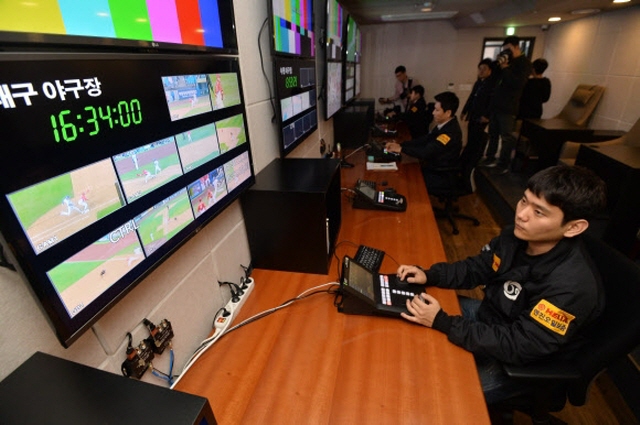 Introduced to make fair and accurate decisions, video reviewing has sometimes been a decisive factor in deciding the outcome of a game, and a medium of interest for fans. (Yonhap)

The KBO reported on Tuesday that two additional cameras would be installed before the start of the season at stadiums around the league, with the new cameras placed near home plate and third base.

This will bring the total to five cameras, of which three were installed by KBO themselves. The KBO office invested 300 million won (US$265,000) to install the new cameras.

The center, which was established in 2017, has been viewing videos from 10 cameras, including three of the KBO’s own cameras and seven from broadcasting companies.

From this year on, it will be able to analyze close calls more accurately with 12 cameras.

Introduced to make fair and accurate decisions, video reviewing has sometimes been a decisive factor in deciding the outcome of a game, and a medium of interest for fans.

During the two years since the system was implemented, the number of applications for video reviewing increased from 706 in 2017 to 774 in 2018.

This data suggests that the number of applications for reverse has increased, but the number of cases where decisions have been overturned has been reduced.

However, it remains as a disappointment that the center and the broadcasting stations do not communicate well with each other, so viewers who watch baseball on TV or mobile, and those who watch games at the stadium in person cannot readily know the outcome of the video replay analysis.

Major League Baseball, which introduced instant replay in 2008 and expanded its scope to almost every situation except for ball-strike decisions in 2014, shows baseball fans the contested calls in detail on its website.

Although video reviewing images appear on the website for only a day or so, they contribute greatly to increasing the transparency of judgment.

As fans increasingly want more from baseball, the center and broadcasting companies should provide video reviewing screens in time to satisfy fans’ desire.