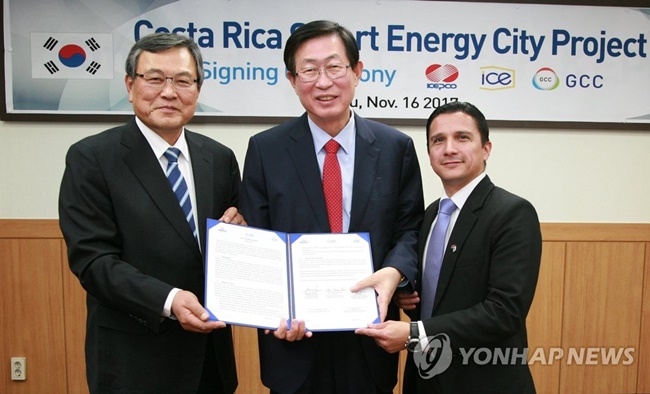 Officials from KEPCO and ICE, a Costa Rican government-run electricity and telecommunications services provider, met earlier this month to sign a letter of intent at the KAIST Global Commercialization Center in Seoul, according to KEPCO on Tuesday. (Image: Yonhap)

JEJU, Nov. 23 (Korea Bizwire) – The Korea Electric Power Corporation has signed an agreement with Costa Rica that could see its smart energy city project adopted by the Central American country.

Officials from KEPCO and ICE, a Costa Rican government-run electricity and telecommunications services provider, met earlier this month to sign a letter of intent at the KAIST Global Commercialization Center in Seoul, according to KEPCO on Tuesday.

Though the agreement isn’t legally binding, it raises the likelihood of Costa Rica adopting KEPCO’s business model for its carbon-free island project on Jeju Island, as officials from the two countries have decided to work together including a joint research and development project in the future.

The joint efforts include the development of microgrid business models, a smart electric car charging system, infrastructure for renewable energy and energy storage systems, as well as smart electric wiring systems, with the purpose of launching a carbon-free island project in Costa Rica.

KEPCO previously developed a business model to make Jeju Island a carbon-free island by the end of 2030, and state-run electricity energy company ICE will adopt KEPCO’s smart energy city model in Costa Rica in an effort to play a global leading role in renewable energy.

With the hopes of speeding up the process, both KEPCO and ICE are set to form a working group sometime this year, and select a test bed somewhere in Gracia, Costa Rica for a pilot project.

Hwan-Eik Cho, the CEO of KEPCO, said the company’s new project in Costa Rica will pave the way for more business to come in the Central American region.

“KEPCO is running a number of energy projects both at home and abroad, while learning to adopt to different weather conditions. Through the new energy project in Costa Rica, we hope to set up a cooperative business network in Central and South America,” Cho said.

The mayor of Gracia was also hopeful, saying, “The new agreement will be an opportunity to enhance South Korea-Costa Rica relations. We hope our relationship with KEPCO can improve our smart energy city technology.”