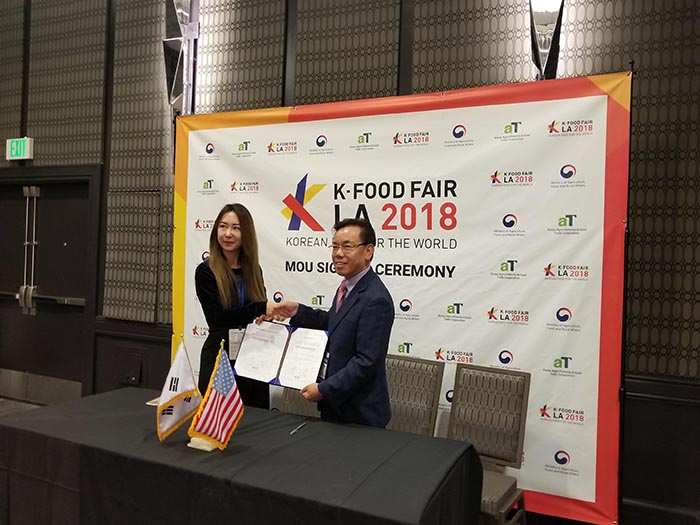 Dubbed “K-Fresh,” fruit, vegetables, ginseng, mushrooms, grains and kimchi from the South Korea have been welcomed in the American market, thanks to their high quality and freshness.

On September 5 and 6, K-Food Fair 2018 LA was held in downtown Los Angeles. It was co-hosted by the Ministry of Food, Agriculture, Forestry and Fisheries and the Korea Agro-Fisheries & Food Trade Corporation (aT).  More than 100 buyers visited the booths at the government-hosted business-to-business fair.

Hando Food signed a $1 million contract with an Asian grocery store, including the sale of nurungji which can be roughly translated as crunchy burned rice.

Korean pears were popular, too. So called K-pears, they are attracting American customers with greater juiciness and a softer texture.

“K-pears sell well in Asian markets as gifts. They are being branded as premier and fancy options than cheaper competitors,” said aT.

“The U.S. is the third-largest market for Korean agro exports. Exports of K-Fresh are thriving, as they reached $100 million in July, a 20.8 percent surge from the last year,” said Baek Jin-seok, the agro-export director of aT.

The export of citron tea is growing the fastest, by 136.3 percent from last year. Other hot items include ginseng at 74.3 percent, pears at 55.8 percent and kimchi at 14.6 percent.

K-Fresh is targeting ethnic markets in the U.S. that sell culturally diverse food – primarily from Hispanic and Asian cultures.

Ramen, ginseng, red pepper paste, mixed spices, mushrooms and squid made their way into Chinese, Latin and Filipino supermarkets in the U.S.