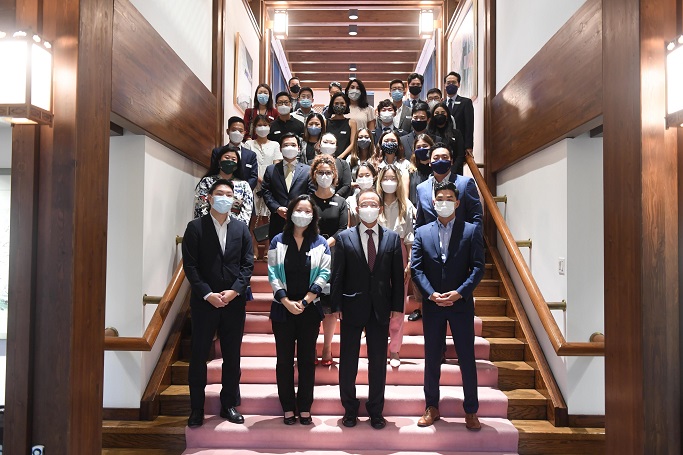 South Korean ambassador to the United States Lee Soo-hyuck (front row, second from R), is seen posing for a photo with members of the Congressional Korean American Staff Association (CKASA) during a meeting at his official resident in Washington on Sept. 16, 2021 in this photo provided by CKASA, a non-partisan Congressional staff organization.

WASHINGTON, Sept. 17 (Korea Bizwire) — Dozens of Korean-American staff members of U.S. Congress came together this week for the first public event hosted by the South Korean embassy in Washington.

The event, held at the official residence of South Korean Amb. Lee Soo-hyuck on Thursday, brought together a bipartisan group of over 30 current and former U.S. House and Senate staff members, according to the Congressional Korean American Staff Association (CKASA).

The event “serves as a significant milestone for Korean American representation in all levels of government and the advancement of our shared priorities,” CKASA said in a press release.

It added Thursday’s event sought to help strengthen U.S.- South Korea relations and also reaffirm communication between the staff members of the South Korean embassy and U.S. Congress that had been disrupted by the COVID-19 pandemic.

CKASA is a non-partisan Congressional staff organization, which was officially recognized by the House of Representatives in 2019, and is sponsored by all four sitting members of Congress of Korean descent: Rep. Andy Kim (D-NJ), Rep. Young Kim (R-CA), Rep. Marilyn Strickland (D-WA) and Rep. Michelle Park Steel (R-CA).

Its main mission is to expand Korean-American representation in public service, foster strong relationships with the greater Korean-American and Washington community and build a platform for professional development and mentorship, according to the association.