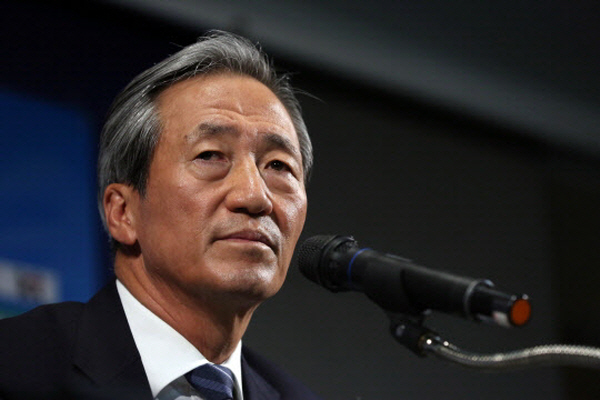 He told a press conference in Seoul that he will officially join the race on Aug. 17 in the French capital. He will first travel to Georgia on Aug. 12 for UEFA Super Cup, where he will hold talks with key European football officials, and make stops through some European cities before arriving in Paris.

“FIFA was founded in Paris (in 1904) and it’s a transportation hub,” said Chung, who was a FIFA vice president from 1994 to 2011. “Around that time, I also hope to meet with UEFA President Michel Platini.”

Platini, a former French international, recently announced his own candidacy and is largely seen as the front-runner.

The election for the new president is scheduled for Feb. 26 next year at FIFA’s current headquarters in Zurich, Switzerland. Incumbent Sepp Blatter, who was elected to his fifth mandate in May, has announced his resignation in the aftermath of devastating corruption scandals.

Aside from Chung and Platini, Jordanian Prince Ali bin Al-Hussein, who ran against Blatter in the May election, could take another crack at the top football job.

Asked to assess his own chances, Chung said, “I believe Platini and I are the leading candidates. I think I have a good chance of winning.”

Chung said he hasn’t settled on a specific venue in Paris for his announcement, which he said will be made around 11 a.m. local time.

“I don’t think it will be easy for a South Korean to run for FIFA presidency,” Chung said. FIFA has had eight presidents in its history and seven of them have been Europeans, with Joao Havelange of Brazil as the lone exception.

“But I think this is more than worth the effort, and I will do the best I can,” Chung added. “FIFA is responsible for its own problems, but leaders of European football should also be held accountable. If there had been healthy leadership in Europe, those leaders would have guided FIFA toward a better direction.”

“I told Yomiuri Shimbun in a recent interview that I have a 99 percent chance of winning if Japan helps my bid,” Chung added. “And I really believe that.”

In another interview with foreign press, Chung told AFP that he will only serve a single, four-year term and added, “I don’t want to be a FIFA president who just enjoys the luxury of the presidential office.”

Chung has faced criticism of his own that since he, too, has been with FIFA for nearly two decades, he should also hold himself responsible for problems that mar the organization.

Chung insisted Thursday that he believes he did the best he could as a FIFA vice president.

“I always worked in the interest of football and FIFA,” he said. “Yet Blatter and Havelange were critical of me. They said I wasn’t their friend. Looking back, I think I should have made my points clearer.”

In the early stages of his campaign, Chung has pushed an anti-Blatter and pro-reform agenda. He said alleged corruption at FIFA isn’t a problem confined to a small number of individuals.

A case in point: Chung noted that Jeffrey Webb, former president of the Confederation of North, Central American and Caribbean Association Football (CONCACAF), was arrested on corruption charges in May, after just three years on the job. Chung said the arrest was a sign that corruption at FIFA is more rampant than feared.

“(Scandals) have reached this point because rules and regulations weren’t properly honored,” he said. “And such things have become the norm at FIFA.”

The 2010 election that awarded Qatar and Russia the 2018 and 2022 FIFA World Cups, respectively, have also come under scrutiny, with the FBI also reportedly investigating how the countries won the bids.

“We absolutely shouldn’t have decided the two hosts in one election, and I feel ashamed that I, as an executive committee member, couldn’t put a stop to it,” Chung said. “The most important part of selecting the host is to make sure the 32 participating countries will compete in the summer. Then it was changed (to winter in Qatar).”

Chung went on to say that the problems are so grave he doesn’t think money alone can solve them.

“I don’t think Blatter and Platini realize what their problems are,” Chung added. “Platini recently said he voted in favor of Qatar, but this was all supposed to be a secret ballot. Now they’re making it seem as though there are problems with people who won’t tell how they voted. There’s something seriously wrong there.”

Chung also said he was concerned that Blatter and other opponents may try to foil his bid, which has only given him the motivation to prepare the best he can for the election.

A scion of the conglomerate Hyundai Group, Chung is a former six-term lawmaker and a South Korean presidential candidate. He said he hasn’t spoken to President Park Geun-hye about his bid, but admitted he has explained his situation to some government officials.

“There were some who believed the government should take an active interest (in my bid),” Chung added. “But there were others who were more cautious.”