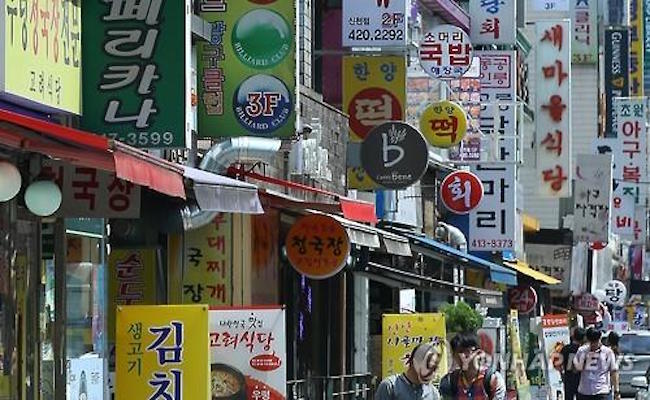 Despite the advantages of high employment and low barriers to entry, the positive growth statistics belie the industry’s problems, such as low wages, volatility and intense competition. (Image: Yonhap)

SEOUL, Sept. 19 (Korea Bizwire) — One might feel a little dazed when dining out in Seoul. Walking by column after column of neon lights advertising a multitude of dining options, all the while breathing in an entire spectrum of scents and odors, diners deliberating on their choices can easily be hit with a strong dose of what Koreans like to call “gyeoljeong jang eh” or “indecisiveness disorder”.

Their confusion is certainly excusable, with the morass of eateries that dominates almost every city block being a product of rapid industry growth, according to “2017 Food Products Industry Figures”, a statistical report released by the Ministry of Agriculture, Food and Rural Affairs. The report tabs the growth of the restaurant industry at 8.9 percent (2015 figures), an increase that is attributed to societal shifts towards single-person households that dine out frequently and the relatively low barriers to opening up a restaurant.

The proliferation of restaurants means that there is one eatery per 78 Koreans (assuming South Korea’s population is estimated at 51.53 million), which means that literally the entire country could decide to eat out and find seats. The ministry’s report also revealed that restaurants employed 1.95 million workers and brought in 108 trillion won in annual revenues, roughly one tenth of South Korea’s GDP (2015 figures).

A closer look at the statistics shows that in regards to employment, the restaurant industry was shaped like a pyramid, with 86.5 percent or 569,000 restaurants making up the base. These “mom and pop” restaurants typically employed fewer than five workers, even when accounting for the owner as an employee. The next level up, the “middle class”, was drastically smaller in comparison. These restaurants employed a minimum of 10 employees and represented a mere 8.7 percent of the industry.

A Statistics Korea analysis on wages conducted in June found that those employed in the hospitality industry earned an average monthly wage of 1.73 million won, only slightly above half the national average of 3.29 million won. (Image: Yonhap)

Despite the advantages of high employment and low barriers to entry, the positive growth statistics belie the industry’s problems, such as low wages, volatility and intense competition.

A Statistics Korea analysis on wages conducted in June found that those employed in the hospitality industry earned an average monthly wage of 1.73 million won, only slightly above half the national average of 3.29 million won.

In another report, this time from the Bank of Korea, lodging and dining establishments took out 12.4 trillion won in loans from non-bank sources in the first quarter of this year. The aggregate loan value increased by 30 percent in the following quarter, leading to increased concerns about the levels of risk associated with businesses in those industries. As banks decided to ramp up their loan vetting on small business owners to better manage risk, those on the bottom level of the restaurant industry pyramid began to look elsewhere for funds.

In addition, the pending passage of a law that will raise the minimum wage, soaring prices of produce, not to mention unexpected indignities like the “pesticide egg scandal” and outbreaks of avian flu have and are placing pressure on the shoulders of restaurant owners.

One owner said, “Not only has the aftermath of a stagnating economy resulted in diminishing disposable income and significantly shrinking consumerism, but there are too many restaurants as the barrier for entry is low, which is characteristic of this industry. This has intensified competition and led the dining industry into an ice age.”

Despite such concerns, restaurants seem likely to continue popping up, helmed by retirees with savings but little else in the way of economically viable skills. Although popular yet cynical phrases like “Close Shop in Three Years” and “Retirees’ Grave” have become bywords for the risks that restaurants present, the dream of opening up a successful one remains alluring.

In May of this year, 33,639 businesses were registered by owners who were at least 50 years old, a significant portion of them in the fields of lodging and dining. Like any country, South Korea has problems. But unlike many countries, finding a table for two may never be one of them.