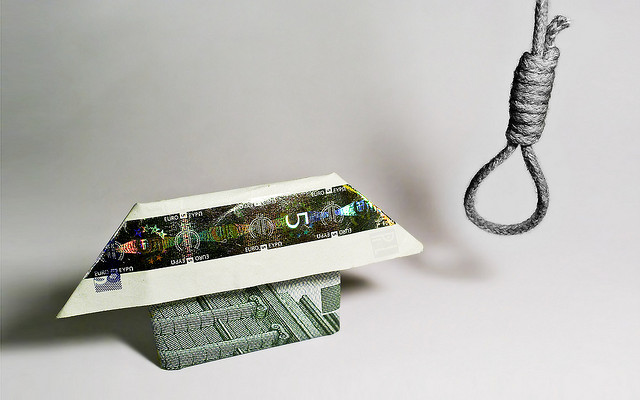 Usually, if the ratio of household leverage to the nominal GDP reaches about 85 percent, it is considered a critical level which can cause an economic crisis. (image: ~Pil~/flickr)

SEOUL, May 28 (Korea Bizwire) – An analysis that Korea’s household debts have not only exceeded the OECD average but also reached the critical point which could trigger an economic crisis has come out.

On May 27, at a seminar on “Korea’s Macro Leverage: the Analysis and Prospect” held by Korea Institute of Finance, a senior analyst Lee Myung-hwal said, “The ratio of household debt to the nominal GDP was 86 percent which is much higher than the OECD average of 69 percent according to data from 2012.”

Usually, if the ratio of household debt to the nominal GDP reaches about 85 percent, it is considered a critical level which can cause an economic crisis. Macro leverage is the sum of debts held by economic agents including households, corporations and the government divided by disposable income.

According to the Bank of Korea’s data of “Household Credit in the First Quarter 2014,” the household debts in the first quarter were 1,024.8 trillion won, which is a record-high level. The KIF researcher has expressed a concern regarding the reduced ability of the vulnerable members of society to repay debts.

He said, “The vulnerable social group’s income tends to recover more slowly and not substantially.”Despite the exceptionally high household leverage ratio, the macro leverage, or the ratio of debt to the nominal GPD, of the overall economic agents in Korea was 230 percent, which was lower than the OECD average of 271 percent.

Lee the analyst said, “Leverages at a moderate level can have positive effects on the economic activity but excessive leverages may slow down the economic growth and cause a crisis.”