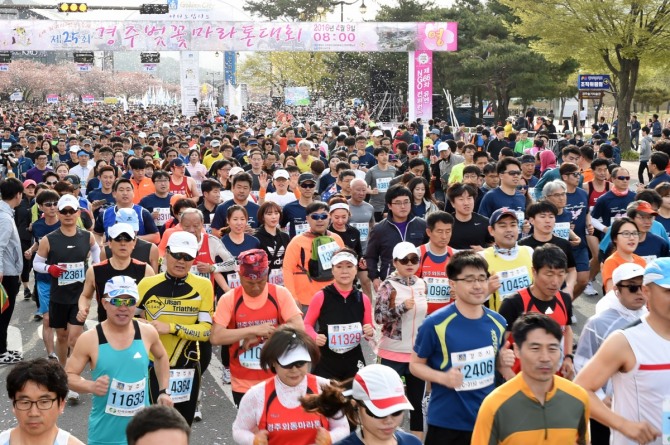 SEOUL, Mar. 30 (Korea Bizwire) — The state tourism body said Wednesday it plans to hold a marathon event for foreign tourists in a southern province later this week as part of ongoing efforts to secure more inbound visitors and promote the country as an attractive tourist destination.

The Gyeongju Cherry Blossom Marathon & Walking event will kick off in the namesake city, some 371 kilometers south of Seoul, on Saturday, with about 1,200 foreign tourists from neighboring countries including Japan and Taiwan participating in the event, the Korea Tourism Organization said in a release.

Gyeongju is the ancient capital of the Shilla Dynasty (57 B.C. – A.D. 935) and is a treasure trove of historic attractions.

Some 436 Japanese tourists have been invited to the event jointly arranged by Japan’s Yomiuri Shimbun, with 542 expected to come from Taiwan and 83 from Hong Kong.

About 200 local participants will also join the event, it added.

The annual fete has taken place since 1992, with cumulative attendance reaching 220,000 as of 2016. The KTO became the joint organizer of the event last year.

“The event is an attractive tourism package for foreign visitors that combines into one festival three themes: Gyeongju, marathons and cherry blossoms. We plan to contribute to diversifying inbound tourists through this event,” said Jeong Jin-su, the head of KTO’s program strategy division.