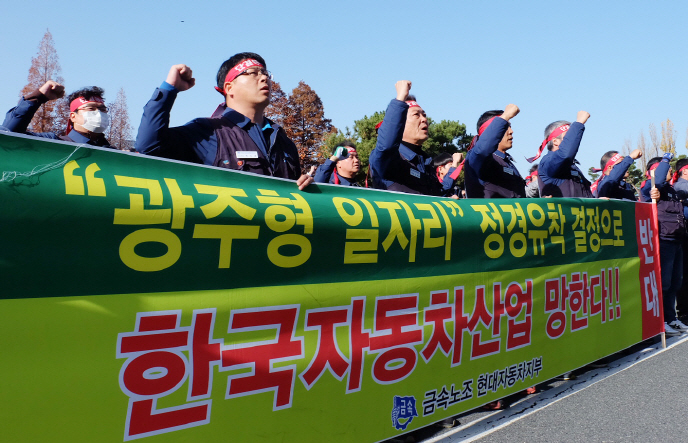 Hyundai workers stage a rally against the Gwangju job project proposed by a municipal government on Dec. 5, 2018. (Yonhap)

GWANGJU, Dec. 5 (Korea Bizwire) — The Gwangju job project, intended to create thousands of new low-paying jobs to help fight unemployment in provincial areas, appears to have hit a snag in the face of resistance from laborers, officials said Wednesday.

The project calls for Hyundai Motor to build a new assembly plant in Gwangju, about 330 kilometers south of Seoul, and hire up to 12,000 employees at half the wages the automaker’s workers currently receive at its main plant in Ulsan, with the Gwangju government offering incentives and subsidies to the new plant.

Officials at the Gwangju Metropolitan Government and Hyundai Motor said Tuesday that they have tentatively reached an agreement on the establishment of the Gwangju car plant.

As the tentative agreement reportedly includes a grace period for collective bargaining agreements, however, the labor circles are raising strong resistance.

It has been reported that the agreement includes deferring collective labor agreements until the Gwangju car factory produces 350,000 vehicles.

The grace period for collective agreements was originally included in an initial deal reached in June, but the labor circles have asked for the abolition of the grace period clause due to its clash with the law.

The Gwangju chapter of the Federation of Korea Trade Unions, a labor umbrella group, has threatened to boycott further talks with the Gwangju government and Hyundai after expressing dissatisfaction at the grace period clause and other content of the tentative agreement.

Officials of the Gwangju government are reportedly trying to persuade labor representatives to come to the dialogue table.

On the other hand, Hyundai Motor’s labor union has also threatened to call a general strike to oppose the Gwangju car plant.

The Hyundai union is considering a four-hour partial strike Thursday, with the labor union of affiliated Kia Motors reportedly moving to join the walkout.

“The Gwangju work project will certainly fail, as the domestic auto market is saturated and the existing car plants have surplus facilities,” a Hyundai union official said.

The Korean Confederation of Trade Unions (KCTU), a militant umbrella union, issued a statement denouncing the Gwangju work project as a scam and threatening to take the case to the International Labor Organization.

“The Gwangju work project agreement to create a special zone free of labor unions and three basic labor rights is a fraud,” the KCTU’s statement said.

KCTU officials said the grace period means there won’t be any collective bargaining for five years, if the plant produces 70,000 vehicles annually.