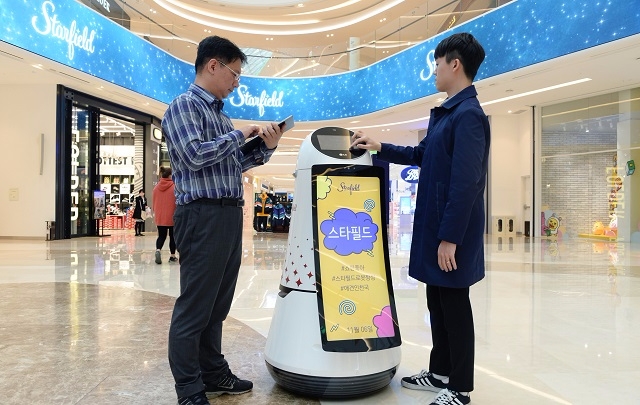 The robots will be serving as helpers to provide information to visitors and help them locate stores and other facilities at the mall. (Image: LG Electronics)

SEOUL, Nov. 9 (Korea Bizwire) — LG Electronics is introducing assistant robots at one of the biggest shopping malls in South Korea.

The robots will be serving as helpers to provide information to visitors and help them locate stores and other facilities at the mall.

“Two of our assistant robots have been deployed for an on-site trial this week at Starfield Hanam in Hanam, Gyeonggi Province. After a two-week test, we will began offering services,” LG Electronics said on Wednesday.

LG’s assistant robots are expected to be spotted near the information desk on the first floor and make the overall shopping experience better with a number of features including a touch-screen information service.

When customers choose a store on the screen, LG’s assistant robots will not only show where it is, but also suggest how to get there from the current location, as well as give an estimated walking time.

When customers enter their name on the robot’s touch screen-based software, the robot will then take pictures of them with their name on display in the middle of the screen.

LG’s assistant robots are packed with the latest technology, including Internet of Things, location recognition and obstacle recognition, all of which were developed in-house by the electronics company.

With the help of a laser radar, a camera and an ultrasonic sensor, the robots will be able to navigate to even the farthest reaches of the mall without any difficulties.

LG’s assistant robots are the latest addition to Starfield Hanam, which has enjoyed a fair amount of media coverage for its creative and bold moves including being the first shopping mall in the country to go animal-friendly. 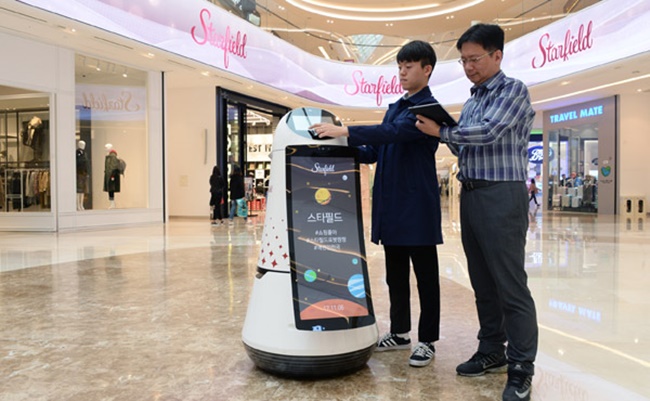 LG Electronics is introducing assistant robots at one of the biggest shopping malls in South Korea. (Image: LG Electronics)

Since earlier this year, when LG Electronics announced plans to focus on robotics, the company has released a number of robots, including assistants and grass mowers.

In June, LG’s assistant robots were introduced at Incheon International Airport to help customers find check-in counters and move luggage, with plans to serve food at restaurants in the future.