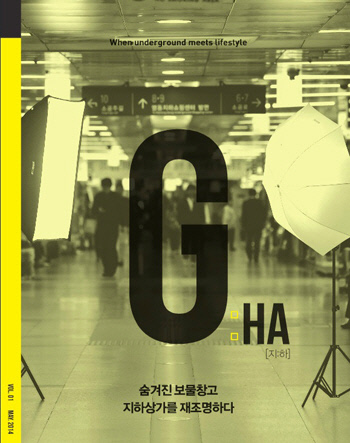 It’s reported that the total area of the combined spaces of the underground shopping malls add up to about 150,000 square meters — about the equivalent of one sixth of the Myeondong area.

With the slogan “When underground meets lifestyle,” the magazine will suggest new shopping culture and lifestyle by introducing good (G) and pleasant (Ha-ha) products. The magazine G:HA will carry articles on the various aspects of the underground shopping areas especially for younger generations who tend to enjoy different kinds of cultures and smart consumption.

In its first issue published on May 23, with the cover story “Review the underground shopping areas, hidden treasure troves,” the magazine introduced hidden gems and special stories of underground shopping malls which were not very attractive to the younger generation.

It also carried the various stories of merchants in the underground shopping areas in Myeongdong, Jongno, Namdaemun and so on selling goods with exquisite workmanship competing with the masterpieces for the world for more than 20 years.

Oh Sung-kyu, CEO of the magazine publisher said, “It is true that the underground shopping centers, once the center of Seoul’s commercial world, and the fashion centers are facing difficulties now due to the change in the retail environment. However, the places are the treasure houses for the variety of products and merchants with workmanship.”

“Now, they are rising again as an importance source of the Korean Wave and the magazine will strengthen their potential as new centers of shopping by informing the readers with hidden aspects of the underground shopping malls,” he added.

The magazine will be published four times a year with 2,000 copies at a time which will be placed in coffee shops and college campuses for free. It can also be subscribed online through its website (http://issuu.com/g_ha/docs/).