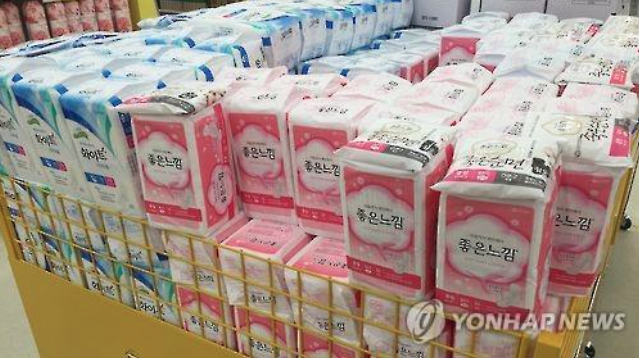 A fair number of consumers, however, point out that sanitary pads, which are almost irreplaceable, should come at more diverse price points, especially considering the fact that these are essential products that women need to purchase on a regular basis. (image: Yonhap)

SEOUL, June 9 (Korea Bizwire) – When stories of young female students from low-income families who couldn’t afford to buy sanitary pads hit the airwaves, Koreans were outraged. Yuhan-Kimberly, Korea’s number-one manufacturer of sanitary pads, cancelled plans to raise its product prices by up to 20 percent (although it did increase the price of one product by 7.5 percent). The company also revealed plans to release lower-priced sanitary pads.

However, despite the leading manufacturer’s latest resolution and public discontent, other manufacturers seem unlikely to follow suit. Instead, they’re only considering donating some of their products, maintaining that lowering prices will ultimately result in poor product quality.

A P&G Korea official said Wednesday that “product prices and new product launches are sensitive information, which we’re obliged not to reveal.” P&G Korea is ranked third in the market for sanitary pads.

LG Unicharm, which is second in the market, and Welcron, another major manufacturer, also revealed Wednesday that they have no plans to develop lower-priced sanitary pads.

However, these companies did reveal plans to increase donations to low-income students and women.

“Instead of approaching this issue at a monetary level, we’ll focus our efforts on creating value,” said a P&G official. “We believe contributing through donations is the right approach for those in need.”

LG Unicharm is considering expanding its existing support program for single-mothers, while Welcron is also reviewing the possibility of increased donations.

“Despite the fact that a significant amount of money is invested into developing quality products, this reality can’t be reflected in our product prices because they’re daily necessities for women,” said an industry official, who requested anonymity. “Releasing lower-priced products could result in diminishing the overall quality of domestic products that are competitive in the global market.”

A fair number of consumers, however, point out that sanitary pads, which are almost irreplaceable, should come at more diverse price points, especially considering the fact that these are essential products that women need to purchase on a regular basis.

“Diapers are also daily necessities, and they come with so much more diversity in terms of price, from private-label products to premium brands,” said a female office worker. “But this is not the case for sanitary pads, and consumers should have more options to choose from.”

However, experts predict that there is a possibility for other manufacturers to follow suit if Yuhan-Kimberly’s upcoming lower-priced sanitary pads prove successful. Yuhan-Kimberly controls around 50 percent of the market, followed by LG Unicharm (around 20 percent) and P&G (around 10 percent).

“Although there are limitations to lowering product prices immediately, other manufacturers won’t just sit and watch while Yuhan-Kimberly makes all the moves,” said an unnamed industry official.