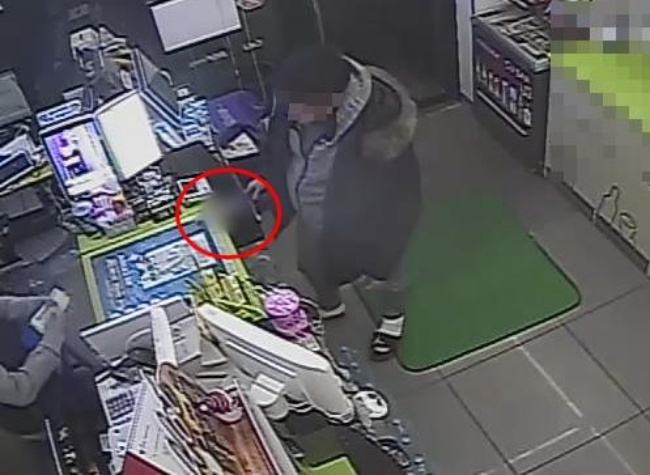 Kim was seen in CCTV footage threatening a store clerk with a knife. (Image: Yonhap)

CHUNGCHEONG, SOUTH KOREA, March 9 (Korea Bizwire) — A 25-year-old man named Kim who was arrested last week on robbery charges in North Chungcheong Province told police that he intentionally committed a crime to go to jail after his business failed.

CCTV footage from the store showed the man exchange banter with a store clerk before pulling a knife out of his pocket, with his face clearly visible as he wasn’t wearing a mask or cap.

Kim then proceeded to demand that the clerk give him all the money in the cash register, then said to the clerk, who is also his acquaintance, “call 112 (the police emergency number in Korea).”

Speaking to the police, Kim admitted, “after my business plan didn’t pan out the way I wished, I decided to commit a crime so that I could go to prison.”

On the same day around 2 p.m., an intoxicated man in his early 40’s barged into a convenience store in the same province, throwing drinks from the refrigerator around the establishment. He was later arrested on charges of obstructing a private business. Police found the man had five previous convictions for similar criminal offences.

When asked in an interrogation why he had committed a crime again, the man said, “I prefer prison since the economic hardships I face as a day laborer are too harsh.”

Experts say poverty and cold drive more people into prison as jobs for low-skilled day laborers are scarce in the winter.

The vicious circle continues for those who commit crimes out of poverty and desperation as they usually end up with a criminal record, which makes it much harder to get a job again.

“Going to prison on purpose just to meet basic needs is an extreme and foolish choice to make and poses a great threat to the norms of society,” said Gwak Dae-Gyeong, professor of police administration at Dongguk University.