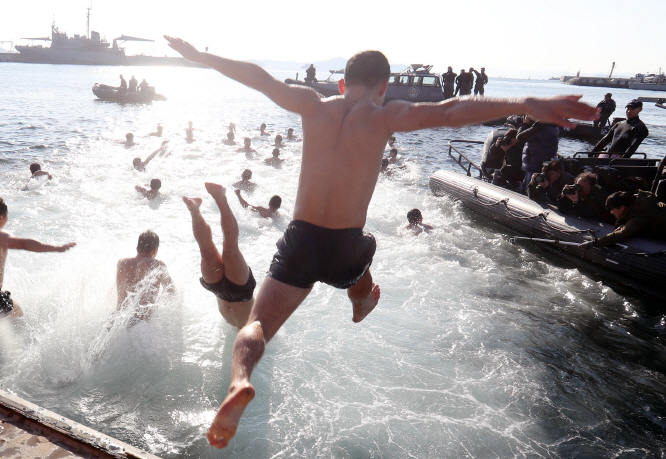 Members of the Navy’s elite ship salvage unit (SSU) jump into cold water in the sea off Yeongam on the southwestern coast on Jan. 17, 2018, as part of their cold weather exercise. (Yonhap)

Around 70 members of the special unit kicked off the three-day training in and around waters off South Korea’s southern port of Jinhae on Tuesday that focuses on honing skills for conducting operations underwater.

The programs include training to become proficient in using a self-contained breathing apparatus, commonly referred to as scuba; rubber boat pedaling; underwater swimming; and a rescue mission from a maritime helicopter.

“This training is meant to help arm our service personnel with strong mental and physical excellence in order to fulfill missions under any circumstances,” the Navy said in a release.

Established in 1950 as one of the Navy’s special forces, the unit carries out ship salvaging and search and rescue missions, among others.