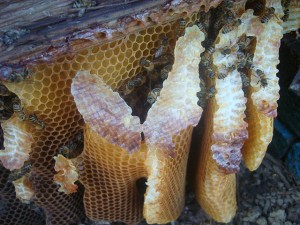 Some urban beekeepers can make 3 million won a year from a few beehive boxes on a rooftop. (image: tastybit@flickr)

SEOUL, Korea, Jan 14 (Korea Bizwire) – As the pet market grows rapidly, there are more and more pet owners who make respectable incomes from the pets. For example, dog breeders can fetch an average of 500,000 to 1 million won for purebreds. The breeding fee skyrockets if the dog wins awards in canine shows.

This is not just restricted to dogs. Some urban beekeepers can make 3 million won a year from a few beehive boxes on a rooftop. According to the Korean Beekeeping Association, the number of its members registered within the city of Seoul is 150. Including hobbyists, however, the actual number of beekeepers in the city is estimated in excess of 500. The reason more people are interested in beekeeping is it is not so hard to get into the business while potentially lucrative in its payoff. On average it costs about 200,000 won to set up a beehive but pays about 1 million won for 20 liters of honey the beehive produces.

Others are making money from raising aquarium fish and even insects. Government agencies such as the Ministry for Food, Agriculture, and Forestry are encouraging this trend by opening technical centers, believing that these are excellent ways to complement farmers’ income. The Ministry of Oceans and Fisheries has recently shifted its policy focus more toward aquarium fish species from conventional food fish as a way to increase fishermen’s income.