“The Korea-U.S. relationship, which is stronger now than ever, is one of the most important diplomatic relations that the United States is maintaining throughout the world. The two nations share cherished values such as free market, democracy, human rights, and the rule of law and fought a war on the same side to defend these values.”

“For a few months since I was nominated as the new ambassador to South Korea, I spent a lot of time boning up for Korea’s history, society, and culture. Korea is such a fascinating country. I like Korean foods especially bulgogi, bibimbab, and kimchi.” 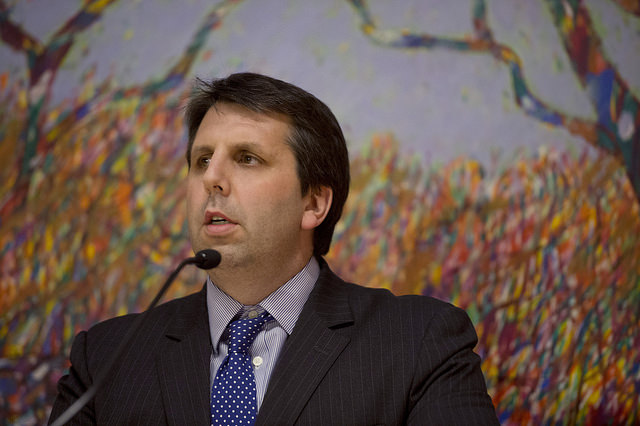 Mr. Lippert swore in as the ambassador in the Treaty Room at the State Department presided over by Secretary of State John Kerry, with 80 family members and friends in attendance. (image: Chuck Hagel/flickr)

SEOUL, Oct. 27 (Korea Bizwire) — At the swearing-in ceremony of Mark Lippert held at the State Department on October 24, President Barak Obama made a surprise appearance in a show of his confidence and friendship to his former foreign policy advisor during his Senator days.

Diplomats in Washington, DC commented this is the first time for the American President to pay this much interest in an ambassador to South Korea. The same source said, “It seems Mr. Obama treats the new Ambassador Lippert like a younger brother.”

At 1:45 pm on the 24th, Mr. Lippert swore in as the ambassador in the Treaty Room at the State Department presided over by Secretary of State John Kerry, with 80 family members and friends in attendance.

In an evening reception in celebration of Lippert’s ambassadorial inauguration held at the Korean Embassy in Washington, DC on the same day, 50 dignitaries attended including Defense Secretary Chuck Hagel and Assistant Secretary for East Asian and Pacific Affairs Daniel Russel.