The Moon Jae-in administration has decided that South Korea’s Parents’ Day on May 8 this year will remain a non-holiday, which should temporarily settle the unexpected clash of opinions that arose over what would have transformed May’s first weekend from a 3- to 4-day holiday period. (Image: Yonhap)

SEOUL, April 11 (Korea Bizwire) — The Moon Jae-in administration has decided that South Korea’s Parents’ Day on May 8 this year will remain a non-holiday, which should temporarily settle the unexpected clash of opinions that arose over what would have transformed May’s first weekend from a 3- to 4-day holiday period.

In the past couple of days, both those who supported and opposed the possibility of celebrating Parents’ Day as a holiday posted petitions on the presidential Blue House website, fired off opinions on social media and caused “Parents’ Day” to rise to the top of trending news topics on South Korea’s dominant internet portal Naver.

By Tuesday afternoon, six petitions had been made to the president, calling on Moon to keep one of his campaign pledges.

Moon as a presidential candidate had previously promised that he would designate Parents’ Day as a public holiday, once last year on May 7 and once in December of 2012.

With the first week of May only a month away, the question of coloring another day red on South Korea’s calendar – all national and public holidays as well as Sundays are indicated in red – had been abruptly raised, and the subsequent public excitement over the matter had caught the government off-guard.

A high-ranking official with the Blue House had told Yonhap News yesterday that the government would have to examine the possibility. “Without many days left [until Parents Day], we are quite taken aback by the fact that this became an issue out of the blue,” the official had said. 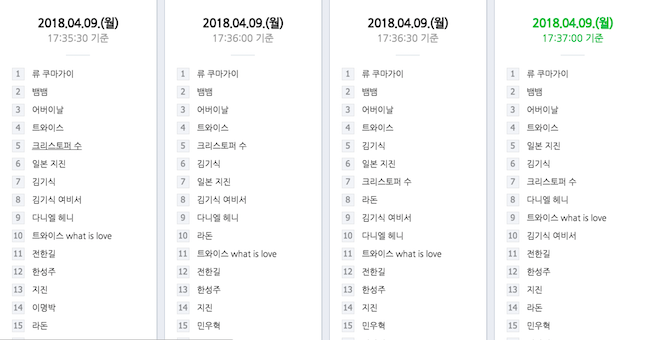 A screenshot of Naver’s top trending topics on April 9. The word “어버이날” at number three is Korean for “Parents’ Day”. (Image: Naver screenshot)

The reasons given by the faction desiring Parents’ Day as a holiday have largely revolved around “hyodo”, Korean for filial piety. In a country still deeply rooted in Confucian values, statements such as “have to seek out my parents” and “it is only right for a day devoted to expressing gratitude to one’s parents be a public holiday” still carry weight.

Aside from familial duties, the merit in having an additional day off becomes clear when examining the calendar. This year, May 5, South Korea’s Children’s Day and an official public holiday, has fallen on a Saturday, meaning that the following Monday has been declared a replacement holiday according to an enactment by the former Park administration. Thus, a holiday on May 8, Tuesday, would make the holiday period four days long.

Despite the prospect of another day off, not all are keen on the idea. Among those in objection are scores of married women who insist that the long holidays will turn into another long stay with their in-laws similar to Chuseok and Lunar New Year’s. With sufferers of “holiday syndrome” occurring every year post-holidays from overwork and stress, extended family gatherings are occasions to avoid for many.

Another major reason for the lack of enthusiasm for the extra holiday appears to be based on economic grounds. Choi Seung-jae, chairman of the Korea Federation of Micro Enterprise, said in a radio appearance yesterday, “When a holiday period grows longer, there is a part of it that hurts microbusiness owners.”

Choi Seung-jae, chairman of the Korea Federation of Micro Enterprise, said in a radio appearance yesterday, “When a holiday period grows longer, there is a part of it that hurts microbusiness owners.” (Image: Yonhap)

As an example, Choi brought up last year’s Chuseok extended holiday period and explained that microbusinesses in the city had lost around a third of their typical revenues.

It is not just entrepreneurs who harbored ambivalent feelings at best over tacking on another holiday in May. Non-regular workers and employees of SMEs are two sections of the workforce for whom the extra public holiday may have an undesired impact. This is because those employed at smaller firms may not be given the day off on a public holiday, while non-regular workers may ill afford to lose out on a day’s wages.

For now, it appears that the economic arguments may have won out over filial piety – at least this year. Presidential spokesperson Kim Eui-kyeom, who broke the news today that Parents’ Day’s designation will remain unchanged, said the president’s decision was made after prime minister Lee Nak-yeon surveyed government’s economic experts and submitted a report.

Whether May will have another red date in the future is still, according to Kim, up in the air. (Image: Yonhap)

Whether May will have another red date in the future is still, according to Kim, up in the air. He said, “After next year, the plan is to conduct a comprehensive examination of research done by the Ministry of Personnel Management over a sufficient period of time before making a decision.”