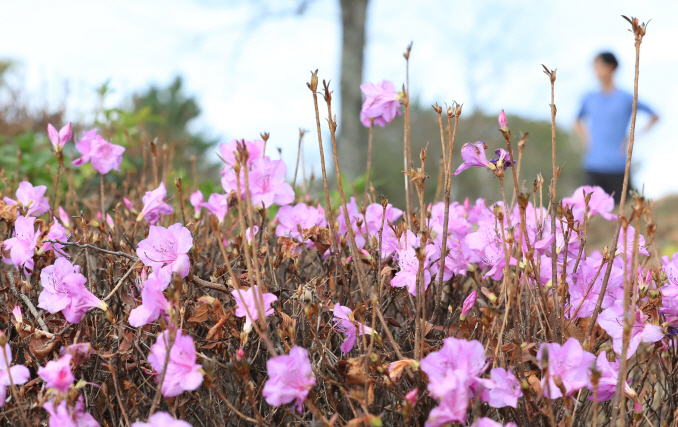 Royal azaleas are in bloom at a university campus on Jeju on Jan. 7, 2020, as the morning low rose as high as 18.5 C on the southern resort island. In South Korea, royal azaleas usually bloom in May. (Yonhap)

SEOUL, Feb. 1 (Korea Bizwire) — The number of days in January this year with the lowest morning temperature hovering above zero came to 11 in Seoul, the most in 31 years, due to weakened Siberian high pressure this winter, the weather authorities said Saturday.

The Korea Meteorological Administration compared the figure to the three such days recorded the previous year and the 13 in 1989.

During the reported year, South Korea’s inland and southern areas saw the mercury stay above zero in the morning for more than 15 days.

In Incheon, west of Seoul, the mercury did not fall below zero in the morning for 12 days, the highest level since the 15 days in 1979.

The southern cities of Busan, Gwangju, Ulsan and Jeonju recorded their respective numbers of days in January with morning temperature above zero as 27, 20, 23 and 17.

The numbers reached the highest level since 1973, when the administration began to compile related data.

The milder winter, however, is likely to recede for the time being as the Siberian high pressure is forecast to expand starting Saturday, with most areas in the country to record subzero morning temperatures.

The administration forecast that the lowest temperature in the morning will fall to 10 C below zero and 5 C below zero in the country’s central and southern areas, respectively, on Wednesday.