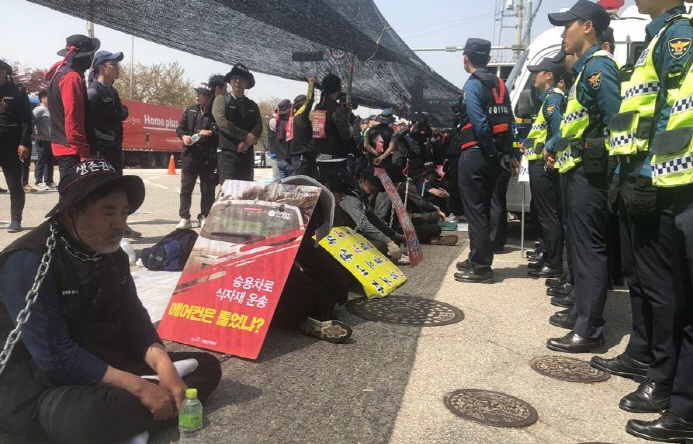 The conflict sparked controversy after the company demanded that the drivers sign an indemnity report that bans them from joining labor unions. (Yonhap)

PYEONGTAEK, Apr. 23 (Korea Bizwire) — Nonghyup Logistics Service Inc.’s decision to fire groups of truck drivers and labor union members sparked a protest that is turning into a major dispute between the two parties.

The conflict sparked controversy after the company demanded that the drivers sign an indemnity report that bans them from joining labor unions.

“Nonghyup Logistics had been forcing drivers to agree to an indemnity report suppressing their union activities. Now, the company is trying to include a provision in the hiring contract that bans the employees from joining labor unions, while accusing the drivers of interfering with the operations of the company,” said a source familiar with the Nonghyup Logistics union.

“Our fourth attempt for negotiation just ended in a failure, and Nonghyup Logistics is still insisting on its abhorrent stance.”

Nonghyup responded by saying that the Anseong Logistics Center had already been suffering from a 20 percent decrease in business long before the protest began, and that the company had been planning to cut 10 percent of the drivers.

“They need to compensate for the damages incurred. In the contract, all we’re trying to do is to insert a statement in the employment contract that the driver shall not reject delivery or engage in illegal protests. We are open to talk with the drivers as to how the statement will be included in the contract,” the company added.

Truck drivers argue that they have yet to receive their payment for March, which should have been paid on April 15.

Police officers stopped a protester from setting himself on fire last weekend during the demonstration, preventing any fatalities. On the same day, another protester was apprehended for damaging a cargo truck.

In the afternoon, one protester sustained injury and was taken to a nearby hospital.