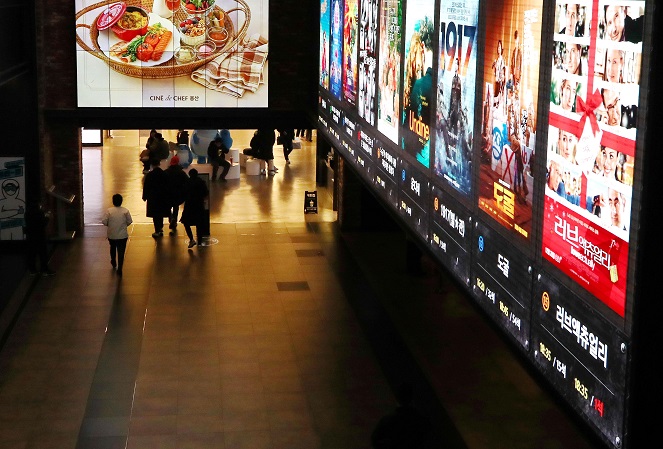 A theater in Seoul is relatively empty on Dec. 25, 2020, as new releases of movies are disrupted by the new coronavirus pandemic. (Yonhap)

SEOUL, Jan. 8 (Korea Bizwire) — The number of daily moviegoers plunged to a fresh record low this week, as new releases have been affected by the latest coronavirus resurgence in winter, data showed Friday.

In particular, only 14,518 attendees were recorded Monday, hitting an all-time low since KOFIC began to compile official box office data in 2004. It renewed the previous record low of 15,429 tallied on April 7, 2020.

The sharp decrease is attributable to the third wave of the COVID-19 pandemic that has led to a series of postponements of blockbusters targeting the Christmas and New Year’s holiday season.

Released on Dec. 23, “Wonder Woman 1984″ by Warner Bros. Entertainment Inc. is one of the few commercial films that hit South Korean screens over the few weeks.

The DC Universe film has topped the box office since its release, attracting 4,000-5,000 moviegoers daily with a cumulative 480,000 audience members as of Thursday.