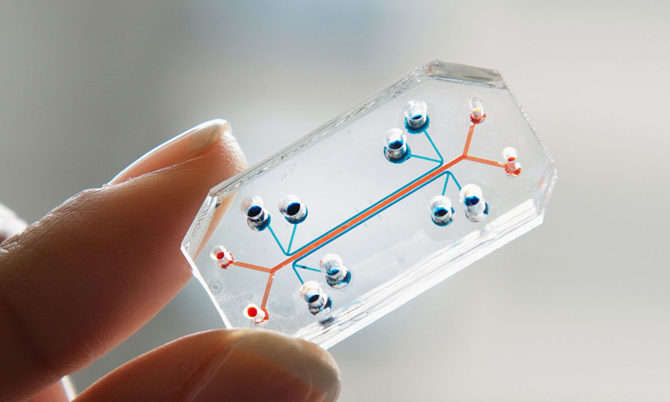 The United States and other advanced nations have organ chips for certain disease models in the commercial market. (image: Wyss Institute)

DAEJEON, Oct. 2 (Korea Bizwire) — ‘Organ chips’ are rising as a new alternative that can replace lab experiments on animals.

Organ chip technology recreates cells that form the blood vessels, lungs, liver, and other human organs in 3D, which are placed on a microfluidic chip to test pharmaceutical reactions in an environment similar to the human body.

The Korea Intellectual Property Office (KIPO) reported that the number of patents for organ chips increased from 14 in 2009 to 25 in 2013 after the European Union (EU) banned the manufacturing and sale of cosmetic goods tested on animals.

The majority of the patents (23 percent) involved using the technology to incubate cells in 3D, since it is essential to cultivate cells that follow the exact characteristics of each organ in order to accurately predict pharmaceutical reactions once the medicine enters the human body.

Most patents have been submitted by universities (49 percent), followed by foreign corporations (20 percent).

The United States and other advanced nations have organ chips for certain disease models in the commercial market, but the industry in South Korea is still in its early stages.

“Organ chip technology is crucial to avoid ethical controversy over animal testing and lead the advancement of drug research,” said Shin Won-hae, head of Biotechnology Examination Divison at the KIPO.