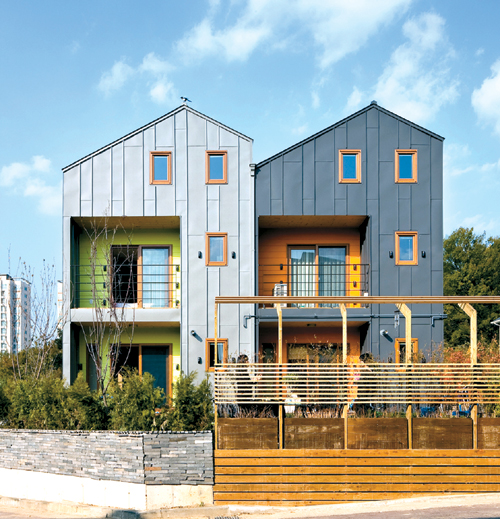 The peanut house, or small duplex home has attracted attention from the jeonse price-weary of late. (image: LHL (Gwangjang Architecture))

SEOUL, Korea, Oct 25 (Korea Bizwire) – As of early October this year, the average “jeonse” price of apartments within the Metropolitan Seoul area has surpassed the 200-million-won level for the first time. Jeonse is a uniquely Korean, as well as Japanese, home lease scheme by which tenants pay a lump-sum deposit of typically 50-70 percent of sales price and get back the whole amount without interest at the end of the lease period.

According to KB Real Estate R-Easy, a real estate information service provider, the average Seoul area jeonse price as of the end of September was 201.2 million won, up 5.1 percent from 191.5 million won during the same month last year.

Amid the depressed situation, the so-called “peanut house” has attracted attention from the jeonse price-weary. The peanut house, or small duplex home, has become famous after a TV show featured the home of Cho Hye-ryeon, a female actor and comedienne, with small-but-pretty garden and well-appointed interior design evocative of a fairytale house. 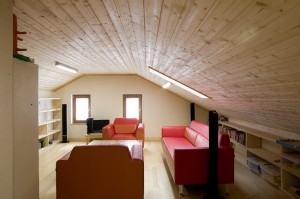 The best thing about the peanut house is its low cost feature. (image: LHL (Gwangjang Architecture))

The peanut-house idea originated in 2011 by architect Lee Hyun-wook who published a book “Two Men’s Home Building Project” in which he told a story of two men putting up a duplex house in one month at the cost of 300 million won. The book sold more than 10,000 copies within 20 days of publication, with more than 20,000 registered members on its online café.

The best thing about the peanut house is its low cost feature. As it minimizes energy consumption through better insulation and optimized architectural design, the monthly energy cost is lower than that for a regular apartment home. The highly standardized prefabricated building design can also reduce the cost of building one, with shorter construction time.

The author’s peanut home introduced in his own book is a three-story house with the top floor shaped like a loft. The bottom two floors, including the first floor with the living room and kitchen and the second with bedrooms, are 52.8 square meters each. Since Lee designed the windows smaller than usual, the heating cost is as low as that for 106-square-meter apartment house, with much bigger space than apartment units that give out sizeable amount of space to common areas such as stairs, corridors, and parking lots. Including everything from land, home construction, interior design, landscaping, and taxes, the total cost for each of the duplex houses was only 366 million won.

Lee said that wooden houses are superior to homes made of steel frames or concrete slabs as wood is much higher in both tensile and compression strength, withstanding better in earthquake. Even without tremors, wood-built homes are more durable lasting 90-100 years while the durability of other houses built of bricks or concrete is at most 40 years. 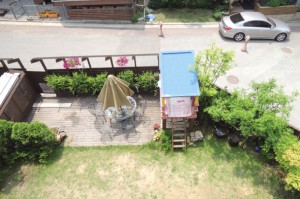 This space-saving can also offer garden like spaces where the tenants can have a nice barbecue party with friends and extended family. (image: LHL (Gwangjang Architecture))

The second reason that people these days are keenly interested in the peanut home is the backyard and loft. Most apartment-dwelling parents feel sorry to their children for not providing enough space for them to run around and play. For them, a house with a garden, no matter how small it is, must be a real godsend. The garden can be a place to have a nice barbecue party with friends and extended family. In addition, 15-square-meter or so loft can be an ideal place for children to hatch outlandish plots and spend a long time to read or talk.

As more and more people opt to build small houses of their own, large construction contractors are moving in to the family home building segment that has been the exclusive area for independent small operators. In June this year, SK D&D, an SK Engineering & Construction subsidiary, launched a detached home brand “Sky Home,” adding its modular home designs to 32 from previous 17.

Not to be outdone, POSCO A&C, an architectural unit of POSCO Group, has built 20 modular homes for its employees in Seoul’s Gangnam. The homes can be assembled freely depending on the way the homeowner designs.

Then is the duplex peanut house the only alternative to the boring apartment dwelling? These days, a new expanded version of the peanut home, called the “green pea house,” the housing arrangement with three or four families in a building, is also on the rise. Unlike duplex houses built horizontally in two identical designs, however, green pea houses are built vertically, with each floor settled in by different households.

The first green pea house debuted in Bundang where a contractor developed a 45-family residential community in a 434-square-meter land plot. The average land area for each home is 96 square meters, with each household given a garden of 25-33 square meters and a vegetable patch of about 10 square meters. The reason the green pea homes were put up in a community form has to do with the fact that it could reduce the land price while economizing on utility costs and improving security.

Lee Hyun-wook, the architect and the author of the book “Two Men’s Home Building Project,” said, “What’s important in a home is not the size but how comfortable it is to you. In a country with the percentage of collective homes in the total in excess of 60 percent, it remains to be seen whether the peanut-home fever can reverse that trend toward ultra-modern living.