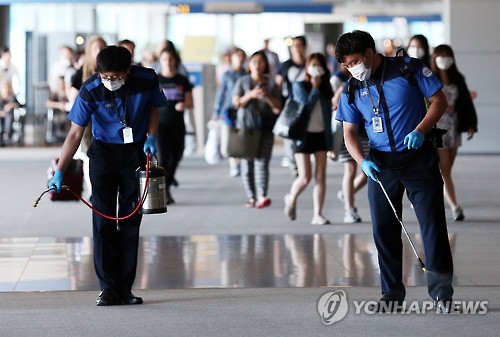 Currently, some 1,300 who were potentially in contact with MERS patients have been quarantined from others, and more confirmations are expected as 99 with symptoms are undergoing MERS tests in Korea as of June 3. (image: Yonhap)

SEOUL, June 3 (Korea Bizwire) – Korean health authorities have confirmed that five more people have been infected with the Middle East Respiratory Syndrome (MERS) virus, bringing the tally to 30 as of June 3.

The Korean government has already stated that the virus has low infectivity, with Health Minister Moon Hyung-pyo even saying that citizens do not need to wear masks. However, the number of infected patients is rising day by day, hinting that poor quarantine and public health systems are fanning the spread of the deadly disease.

The Korean government is currently deploying a quarantine system in its bid to control the spread of the virus. Due to the weak control that quarantines had over the disease in the initial stages, it could not stop the virus when there were fewer infected patients.

Following the confirmation of the first MERS patient in Korea, Korean health authorities raised the crisis alert for the infectious disease from attention to caution, and strengthened quarantines at border check points. In addition, they attempted to find individuals who had been within two meters of the patients for more than one hour, and began checking their status.

Among them, the government quarantined those without symptoms, and moved those with symptoms to public beds.

However, the low level of control caused more infections, and the initial quarantine collapsed as more patients in the same ward or on the same floor as the first patient were confirmed to be infected with the virus.

Under these circumstances, the first MERS patients went through four medical institutions before confirmation, which caused the numerous secondary infections. Among the 26 secondary infected patients, 19 were not included in the self-quarantine category.

Currently, some 1,300 who were potentially in contact with MERS patients have been quarantined from others, and more confirmations are expected as 99 with symptoms are undergoing MERS tests in Korea as of June 3.

With its failure to stop the spread of the virus, Koreans are criticizing the government’s inability to respond effectively, comparing the outbreak to the tragic sinking of the Sewol ferry last year. Chun Woo-yong, a history professor at Hanyang University, tweeted (@histopian), “The government was toing and froing at the Sewol accident. Now, it is going this way and that over the deadly infectious disease. What makes this country be in a state of anarchy is not an anarchist but the government itself.”

A netizen said, “Korea now has third-hand MERS patients. However, the government says it will not be spread to local society. The current government is not different at all from the captain of Sewol who ordered the students to sit calmly with their life vests. Koreans are now boarding a huge Sewol.”

Meanwhile, the government temporarily closed 209 schools to prevent the spread of the deadly virus that has already killed two Koreans.