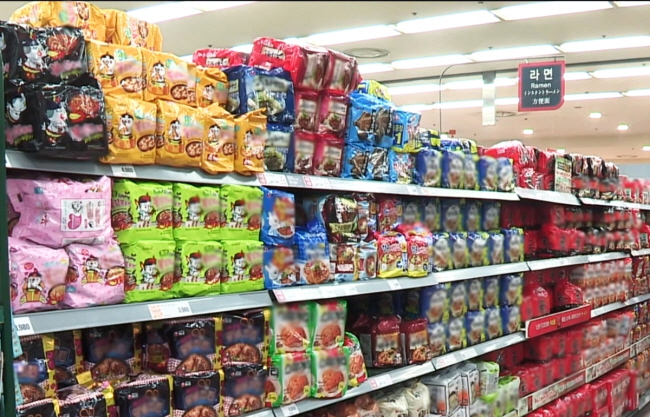 SEOUL, Dec. 19 (Korea Bizwire) — Exports of instant noodles, or “ramyeon,” are sure to exceed US$400 million this year, a state food agency said Wednesday.

Shipments of ramyeon totaled $385 million as of the end of November, up 11.2 percent from the same period last year, according to the Korea Agro-Fisheries & Food Trade Corp. The figure is already more than the total for 2018.

The sum so far gives average monthly exports of $35 million, allowing projections that exports will reach $400 million by end of this year.

Ramyeon remains popular in the United States and in Southeast Asia, and the boycott in China from a bilateral diplomatic row has waned, reopening the market, according to the agency.

Related data showed South Korea exported $8.56 billion worth of agricultural and fisheries products in the first 11 months of the year, a gain of 2.6 percent from the same months last year.

Exports of farm and livestock products rose 2.4 percent to $6.37 billion, and those of fisheries goods were up 3.1 percent to $2.2 billion.

Beverages did exceptionally well in November, setting a record for the month with exports totalling $390 million, according to the data.