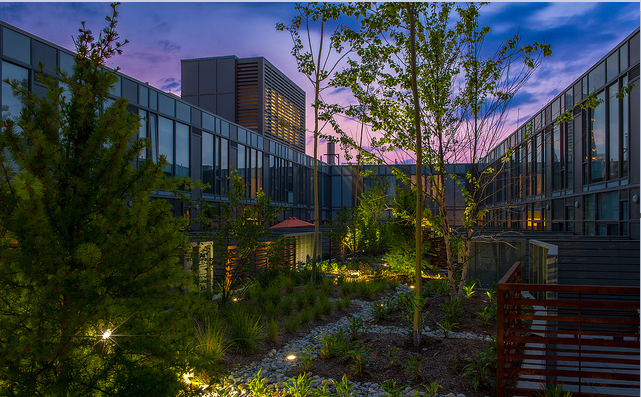 The Rural Development Administration and Dankook University together created a program to gauge the efficiency of plants on eco-roofs in conserving energy. (image: Mario GIambattista/flickr)

SEOUL, Aug. 26 (Korea Bizwire) – The Rural Development Administration has set up a database of which plant on green roofs is most effective at reducing pollution and saving energy, based on which the administration created a system to measure the energy saving level for buildings.

The administration has selected 100 species of vegetation for roof gardens and established the database of their abilities to absorb carbon dioxide and lower urban air temperatures for five years. The data said that Sedum kamtschaticum, Hosta longipes and Allegheny spurge reduce approximately 100 ppm of carbon dioxide. In addition, Sedum kamtschaticum and ivy can relieve the urban heat island effect by cutting as much as 3 degrees Celsius around them.

In terms of the optimal age of plants on the roof garden, two-month-old Siberian chrysanthemum is most energy efficient, while three-month-old Hosta longipes and Phlox subulata were most effective in saving energy.

With the database, the Rural Development Administration and Dankook University together created a program to gauge the efficiency of plants on eco-roofs in conserving energy. Upon entering building data such as area and structure, an area of roof gardens, and type of plants in the scheme, one can find how much she can cut heating and cooling bills.

According to the system, each plant has different degrees of ability to save energy. Considering a vegetated roof of one-story house, the most energy-efficient plants can save the cooling cost by 12.6 percent while the least effective vegetation cuts back the cost by as much as 5.5 percent.

The administration has also developed a vegetation mat to foster green roofs in cities. The effectiveness of the vegetation mat which is easy to use can also be evaluated in the scheme. The public is going to have access to the program at the end of this year, utilizing it to create eco-roofs when designing and constructing a building. It is known to be easy for not only construction contractors but also for ordinary people to use.