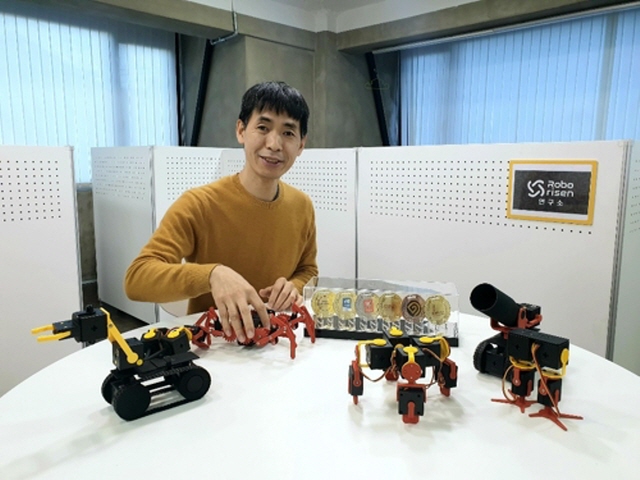 Yim Sang-bin, founder and CEO of RoboRisen, a South Korean robot startup, introduces different types of his app-based modular robot PingPong at his office in Seoul on Dec. 2, 2019. (Yonhap)

SEOUL, Dec. 6 (Korea Bizwire) — As more children are exposed to digital technologies from an early age, a growing number of tech-savvy parents are looking for toys that can help make their kids more creative and smarter.

After searching for an answer for a fun, easy and expandable toy, RoboRisen, a Korean robot startup, developed a smartphone-connected modular robot named PingPong: to serve as a playmate and a teacher for kids in a more engaging way.

RoboRisen founder and CEO Yim Sang-bin said the single-module based platform can easily create hundreds of robots and provides an opportunity to enjoy entertainment at affordable prices.

“My goal was to create an easy and fun robot that can be a lifelong friend for all ages,” Yim said during an interview with Yonhap News at the firm’s Seoul office.

“As PingPong is an open platform, it can be transformed into any form depending on the users’ levels.”

Yim, a former researcher of the KAIST (Korea Advanced Institute of Science and Technology) robot team, introduced PingPong earlier this year after two years of development and launched 13 educational kits for schools in August.

The company plans to release a dozen more models via Wadiz, Korea’s largest crowdfunding platform, later this month to expand its customer base, he said.

PingPong’s entry level cube starts at 55,000 won (US$46.40) and packages for coding and other software education cost around 140,000 won on a local e-commerce site.

The 47-year-old robot scientist, who also runs a local education company supplying coding tools for about 2,000 schools over the past 12 years, decided to start a new business to create a robot that overcomes limitations of the current models used in schools.

With his expertise in the robot industry and know-how in the educational toy market, Yim focused on a robot platform that can be used by all ages, ranging from kindergartens to colleges, and even for adult hobbyists.

“Advanced models are expensive and complicated to assemble, while cheaper robot toys are too simple and make kids get easily bored with limited forms,” Yim said.

“PingPong solved many technical problems by making it possible to construct running, crawling and walking robots with a single module and linkable to other platforms.”

Each cube has a central processing unit (CPU), battery, motor and sensors. By combining cubes and links, the user is able to build any robot they want within several minutes, he said.

Controlling hundreds of cubes with a single smartphone is also possible with Bluetooth networking technology, and users can charge them simultaneously with just one charging port.

“We put in advanced technologies to make it simple and easy,” Yim said. “I would say it’s the pinnacle of minimalism.”

The 36-millimeter square modules were designed to fit into the hands of his two sons, then aged 6 and 10 in 2017, the main target customer of the robot.

“I was lucky to have potential customers at home, who now play well with the robots,” he said. 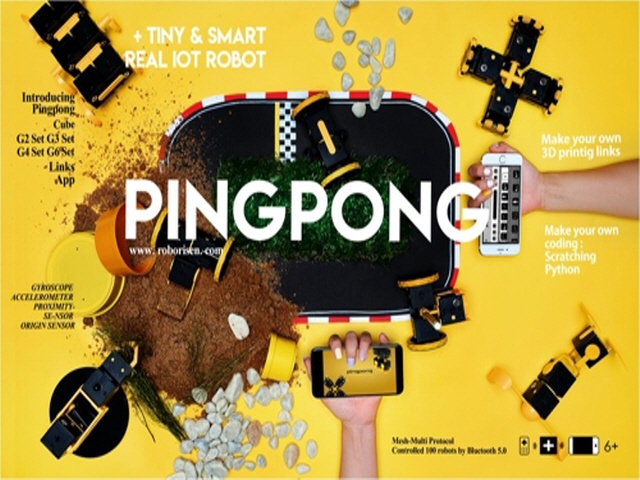 Although the black-and-yellow cubic cell’s design is plain, users can make their own covers with a 3-D printer to decorate it or create links to connect with other modules.

“With a 3-D printer, you can create different links between the modules and customize the cover design,” he said.

Despite its foolproof structure, Yim said the robot can become an educational tool for advanced software courses in colleges as it is built on an open platform, the firm said.

The startup has been talking applications for PingPong for an engineering course curriculum with faculty members at KAIST and the University of Oxford in England, while exploring ways to collaborate with LG Electronics Inc. to apply its artificial intelligence (AI) in its robot platform.

“Expandability is important for educational robots used in schools to meet demands for different educational programs,” Yim said. “Starting at the beginner level, it can be used in curriculums for engineering college students.”

The CEO said the company will focus on distributing the robot in local schools first and expand the presence in the global educational toy market.

As part of efforts, RoboRisen will promote its robots in major tech and education fairs at home and abroad next year, including the Consumer Electronics Show (CES) in Las Vegas and the Mobile World Congress in Barcelona slated in the first two months of next year.

Though still in an early stage in the market, PingPong has received several awards for its innovative design and engineering technology, including the CES 2020 Innovation Award.

The company said it plans to release a full lineup of the robots and educational tool kits in collaboration with other partners, aiming to generate 50 billion won of sales by 2023.

“I want to make PingPong a new standard in robot entertainment, software education and the robotics market,” Yim said.