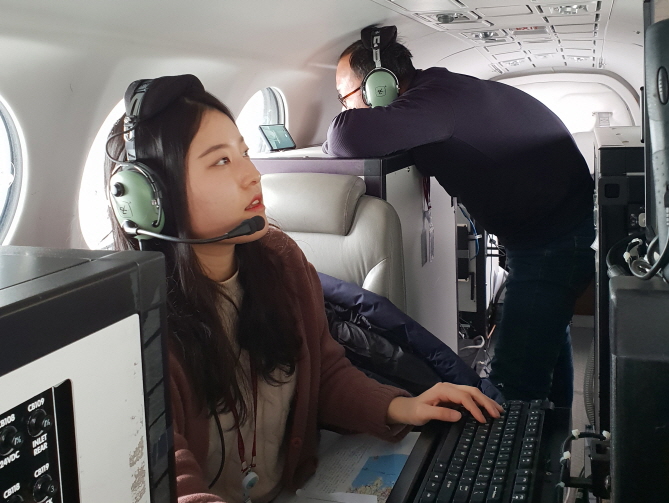 The Korea Meteorological Administration (KMA) and the Ministry of Environment said that their research institutes conducted the artificial precipitation experiment over the sea about 110 km southwest of Gunsan, a port of North Jeolla Province, on Friday but with little success.

During the experiment, an airplane owned by the KMA dispersed silver iodide, a chemical that increases precipitation by collecting water vapor, into the clouds.

It was confirmed that the size of the precipitation particles increased in the clouds but no rain or snow was observed from the weather ship and terrestrial observatories, the two agencies said.

Despite the failure, however, they said the experiment was an opportunity to accumulate technology to accelerate the practical use of artificial precipitation.

“Precipitation was not observed in the experiment areas, but a weak misty rain phenomenon was spotted from a mobile observation vehicle in Yeonggwang (of South Jeolla Province) for several minutes,” the KMA said. Yeonggwang is located about 322 km south of Seoul.

Rain clouds were also observed by the weather ship and are now under close analysis, it noted.

The two agencies plan to announced the final results of Friday’s experiment in late February after conducting a further analysis of experiment details.

They also said they will conduct 14 more artificial rain experiments this year.

The additional experiments will be conducted when a high density of fine dust is forecast, they added.

The government plans to develop an artificial rain forecasting system for various weather conditions by next year.

By 2022, it will develop cloud observation and analysis technology by using aircraft and other observation equipment, and build a “cloud physical experiment chamber” to enhance the success rate of artificial precipitation.

The government has also set the goal of realizing artificial rain around 2024 after developing precipitation materials and technologies suitable for South Korea’s weather conditions.