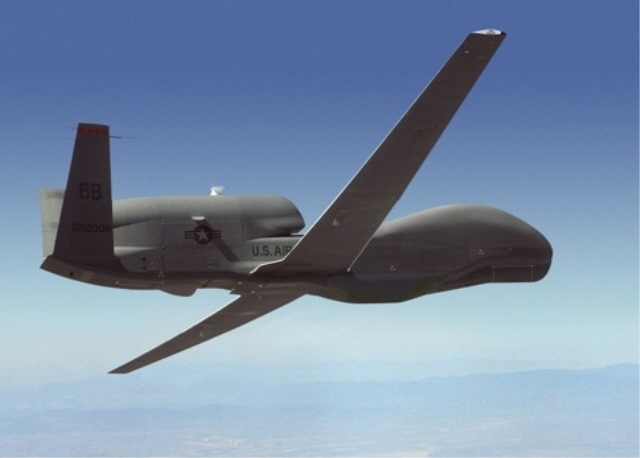 The RQ-4 Block 30 Global Hawk Remotely Piloted Aircraft (RPA) arrived at an Air Force base in Sacheon on the southern tip of the Korean Peninsula earlier in the day.

It is the first of a total of four units that South Korea is purchasing from the United States under a 2011 deal.

The three others will arrive around the first half of next year, though the schedule is subject to change.

Confirming its arrival, defense ministry spokesperson Choi Hyun-soo told a regular briefing that its operational deployment “will be pushed for normally in accordance with plans” without further elaboration.

Asked about the military’s PR plans to mark its introduction, the official said no such ceremonies are planned as of now.

As one of the most advanced intelligence-gathering platforms in the world, the long-endurance unmanned aerial vehicle, manufactured by U.S. defense company Northrop Grumman, is capable of performing reconnaissance missions for around 40 hours at a time at an altitude of roughly 20 kilometers.

Equipped with a state-of-the-art “multi-platform radar technology insertion program” ground surveillance radar sensor, Global Hawk can perform tasks to a range of up to 3,000 km and distinguish objects on the ground as small as 30 centimeters across, which is expected to enhance Seoul’s reconnaissance capabilities in the face of persistent threats by North Korea, as well as growing security challenges from neighboring countries, according to the officials.

Arms procurement agency officials had said the agency was mulling issuing a press release after the first one arrives here, but it decided not to do so “given various circumstances, such as the asset’s strategic significance.”

Such a low-key stance also appears to be in consideration of strong complaints from North Korea, which has lashed out at South Korea’s introduction of advanced weapons, calling it hostile acts.

Last week, South Korea officially deployed F-35A stealth fighters. So far, the country has brought in 13 units of the fifth-generation fighter under a plan to deploy a total of 40 through 2021.

The introduction of such advanced weapons came amid heightened tensions on the Korean Peninsula, as the year-end deadline North Korean leader Kim Jong-un set for Washington to present new proposals to move their stalled denuclearization talks forward is drawing near.

The communist country has warned that it will take a “new way” other than dialogue if the U.S. misses the deadline.

Earlier this month, the North carried out rocket engine tests twice at its Sohae Satellite Launching Station, better known as the Dongchang-ri site, which are feared to be part of preparations to fire an intercontinental ballistic missile (ICBM).