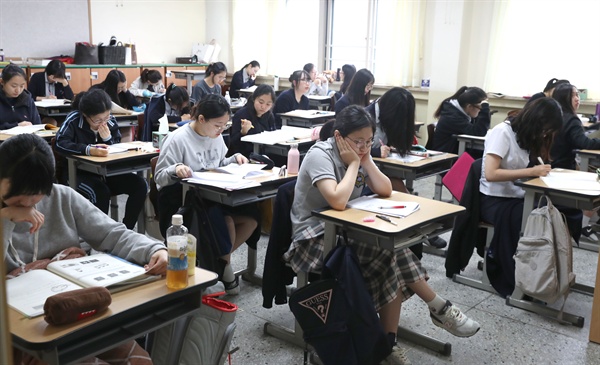 As most high schools nationwide resumed classes on the day after a lengthy summer vacation, about 439,700 three-year high schoolers will not pay for their education during their last semester, the ministry said, noting the per-student benefit amounts to 749,000 won (US$620), including tuition fee, school operation support fee and textbook fee.

The free education program will be expanded to include 880,000 second-year and third-year high schoolers next year and 1.26 million high school students of all grades in 2021.

Beginning in 2021, freshmen will be exempted from paying admission fees too.

In April, the Moon Jae-in government and the ruling Democratic Party agreed to implement free education at high schools in 2021, as part of efforts to guarantee the people’s right to education and help ordinary people reduce their expenditures on education.

The free education program will cover all types of public and private high schools, except for autonomous private, foreign language and art high schools.

Budget for this year’s free high school education, worth 252 billion won, will be paid by regional education offices in the 17 metropolitan cities and provinces.

The free high school education program is expected to cost about 2 trillion won annually from next year to 2024.

The government, ruling party and Cheong Wa Dae have submitted a bill calling on the central government and regional education offices to cover 47.5 percent of the total budget, with the remaining 5 percent shouldered by local governments.

But the bill has yet to pass the National Assembly Education Committee, as the main opposition Liberty Korea Party (LKP) has made a counter proposal that the free education schedule be advanced to include all high schoolers next year.

The LKP’s counter proposal came as it suspects the selective enforcement of free education for seniors, in particular, may be pork barrel politics targeting 18-year-olds who will be newly given voting rights in next year’s general elections.