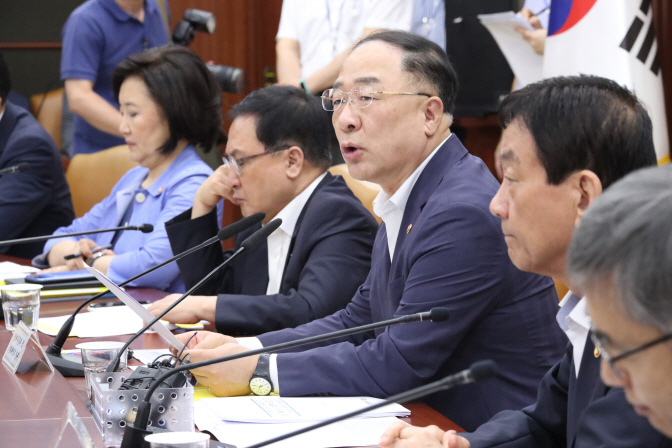 Hong Nam-ki (3rd from R), minister of economy and finance, speaks in a meeting with officials in Seoul on Aug. 5, 2019. (Yonhap)

SEOUL, Aug. 5 (Korea Bizwire) — South Korea said Monday it will spend 7.8 trillion won (US$6.47 billion) over the next five years to nurture its materials, parts and equipment sectors and trim its dependence on Japanese imports in the latest move to cope with the neighbor’s economic retaliation.

The massive spending is also aimed at promoting R&D activities for 100 key strategic items, according to the industry ministry.

“We will upgrade the competitiveness of the materials, parts and equipment industries,” Hong Nam-ki, minister of economy and finance, said in a meeting with officials in Seoul.

In July, Japan also imposed tighter regulations on exports to South Korea of three materials — resist, etching gas and fluorinated polyimide — that are critical for the production of semiconductors and flexible displays.

Of the 100 key strategic items, the industry ministry said it plans to secure supplies of 20 items within a year by reaching out to suppliers in other countries, including the United States and China.

The 100 items were selected from the list of around 1,100 industrial materials vulnerable to being affected by Japan’s removal of South Korea from its whitelist, along with other key products vital for the country’s top six industries, namely chips, displays, cars, electronics, machines and chemicals.

The government will lower barriers for imports of such materials, including the three materials whose imports were restricted by Japan last month.

Fluorine polyimide is used to make flexible organic light-emitting diode displays, resist is a thin layer used to transfer a circuit pattern to a semiconductor substrate, and etching gas is needed in the semiconductor fabrication process.

The government will ease various regulations, including labor rules, to help local industries to speed up the development of key technologies as well.

South Korea will also help local firms seek acquisitions of foreign rivals that hold high-level technologies by providing them with financial and tax incentives estimated at around 2.5 trillion won.

“(The blue print) focuses on finding solutions for South Korea’s weakness in the materials, parts and equipment industries, including its heavy dependency on a certain country,” Industry Minister Sung Yun-mo said in a briefing.

South Korea’s trade deficit with Japan reached US$24.1 billion in 2018, with most of that amount — an estimated US$22.4 billion — coming from the industrial materials, parts and equipment sectors, according to the ministry.

“From research and development projects to verification, the government will build a system in which the companies can work closely, and Seoul will provide supports including facility investment,” Sung said.

The government will join forces with the private sector to launch investment funds that lend a hand to the research projects as well.

South Korea’s pension operators and private institutions will work to establish funds that will center on local materials, parts and equipment industries.

The government will provide the investors with various tax incentives on their profits, the ministry said.