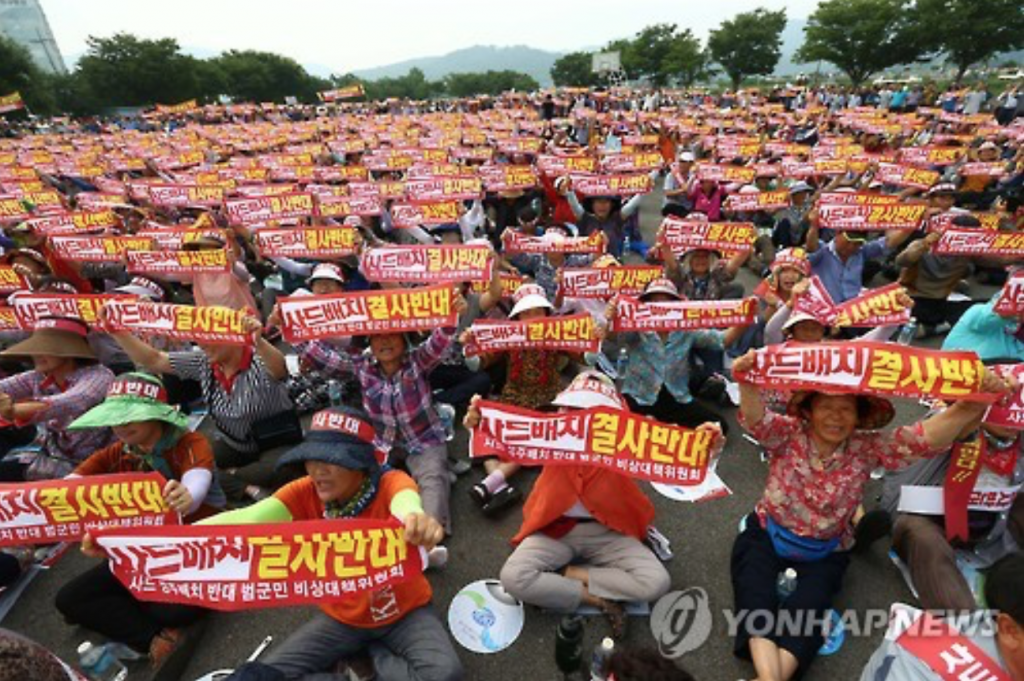 Residents of Seongju County, North Gyeongsang Province, participate in a rally to protest the decision by Seoul and Washington to deploy an advanced antimissile system in the town on July 13, 2016. (image: Yonhap)

SEONGJU, South Korea, July 13 (Korea Bizwire) – Thousands of residents in the southern town of Seongju took to the streets on Wednesday to protest the government’s designation of the town as a site for the deployment of an advanced U.S. antimissile system.

Some 5,000 residents of the town in North Gyeongsang Province staged a massive rally, chanting slogans upbraiding the government for the decision to station a Terminal High-Altitude Area Defense (THAAD) battery in the town.

The residents argued that the decision by Seoul and Washington to bring in THAAD is null and void as it was reached without a “fair and transparent” process of seeking their agreement for the deployment.

They also expressed their concerns over potential health risks from the high-powered THAAD radar. Rumors have circulated that the electromagnetic waves emanating from the radar could cause cancer and infertility. Seoul officials called the rumors “groundless.”

“Our residents take umbrage at the fact that (the government) only demands sacrifices from Seongju County without going through fair and transparent procedures (of getting residents’ consent over the deployment),” said Kim Hang-gon, the administrative chief of the county.

“As we will feel sorry to our descendents and ascendants if we lose our land to THAAD, we will join forces to oppose the deployment of THAAD.”

Calling themselves “sacrificial lambs,” most residents here were incensed about the surprise announcement that their hometown was picked to host the THAAD battery, a core element of America’s multilayered missile defense program.

The allies have decided to station THAAD in South Korea to better cope with ever-growing nuclear and missile threats from a provocative North Korea.

“I was dumbfounded when I first heard that Seongju was picked to host THAAD. There was no prior notice whatsoever,” Lee Seung-bin, a 35-year-old resident in the town, told Yonhap News Agency.

“(The government) is pushing for the deployment here on the grounds that the town has a small population. I cannot believe for sure that THAAD does not pose health risks, and I now want to move out of the town,” he added.

Rep. Yi Wan-young of the ruling Saenuri Party, who represents the town, called on the government to “sufficiently” consult with residents in Seongju before finalizing its deployment decision.

After the rally, some of the town’s leaders including its administrative chief headed towards Seoul to directly lodge a protest with the Ministry of Defense.