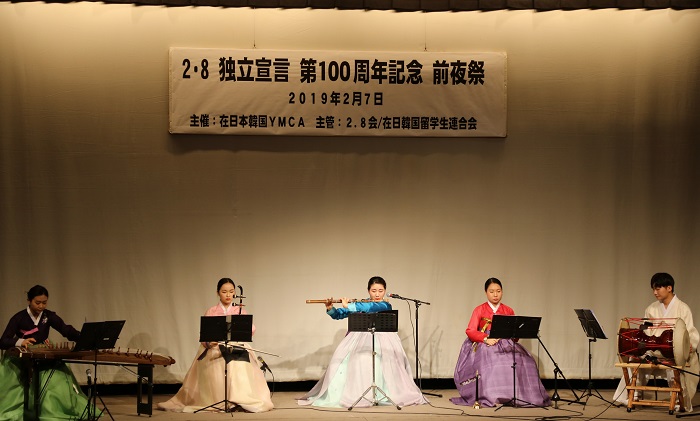 The Korean YMCA in Japan hosted a 100th Anniversary Ceremony of the February 8th Independence Declaration in Tokyo, in memory of those who led the independence movement of Korea 100 years ago on February 8th, in the streets of Japan.

More than 200 participants, including Korean students, residents, and citizens, were present at the event.

The ceremony began with opening remarks from Rep. Lee Jong-kul, a five-term lawmaker of the ruling Democratic Party of Korea and the grandson of Lee Hoe-young, the late independence activist.

“Here, 100 years ago at the capital of our once foremost enemy, our forefathers secretly drafted the declaration of independence of our country,” said Lee.

“Let us continue to follow suit in the spirit of the February 8th Independence Declaration for a brighter future in the next 100 years.” 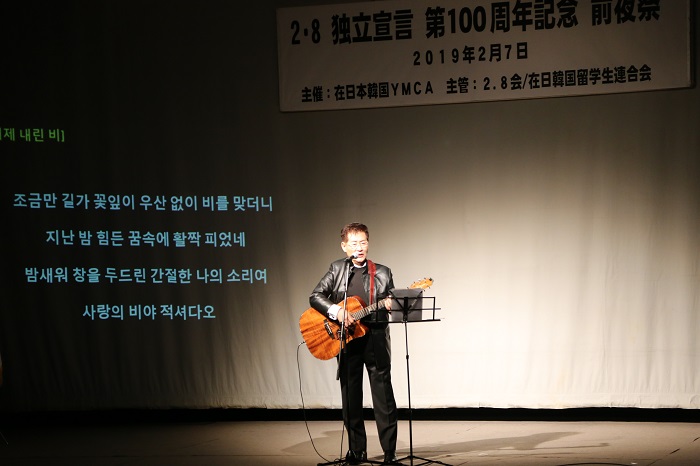 Various Korean traditional performances ensued, including a performance by Yoon Hyung-joo, a singer and the second cousin of the famous Korean poet Yun Dong-ju.

“Our people have gone through the coldest winter of our history,” said Yoon. “Today, we are reminded of the passion of our forefathers who chose to fight for our country.”

The February 8th Independence Declaration was an independence movement led by some 600 Korean students who took to the streets of Tokyo on February 8, 1919.

The incident served as a forerunner to the March 1, 1919, Independence Movement in Korea.

The event continued with the main ceremony scheduled for February 8, attended by Pi Woo-jin, the Minister of Patriots and Veterans Affairs, Lee Su-hoon, South Korea’s ambassador to Japan, and other guests.