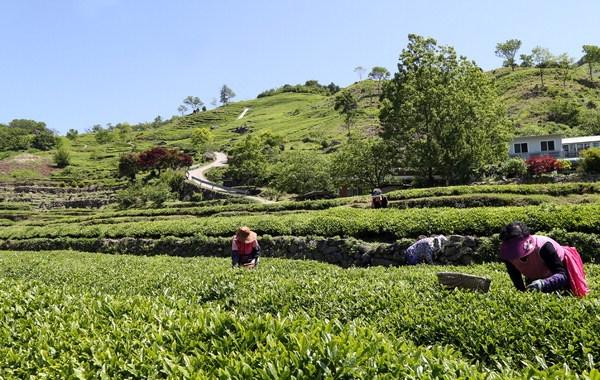 ROME, Apr. 19 (Korea Bizwire) — The U.N. Food and Agriculture Organization on Thursday designated a site in Hadong, a town in South Korea’s South Gyeongsang Province, as one of its world agricultural heritage systems in recognition of the site’s traditional tea-growing method that maintains biodiversity.

At a ceremony to mark the designation of Globally Important Agricultural Heritage Systems (GIAHS) at the FAO headquarters in Rome, the FAO also added 13 other regions in China, Egypt, Japan, Mexico, Portugal, Spain and Sri Lanka to its world agricultural heritage list.

Hagae village in Hadong is the first South Korean tea-growing region to win GIAHS designation. Tea-growing regions in Japan’s Shizuoka and two Chinese sites have been placed on the GIAHS list.

The GIAHS, introduced by the FAO in 2002, is designed to preserve ecologically valuable farming methods that make much use of the local environment and rely on environmentally friendly land utilization systems to preserve biodiversity.

Since 2016, the Ministry of Agriculture, Food and Rural Affairs and the Hadong municipality led a successful campaign to obtain the designation.

During Thursday’s ceremony, Hadong chief Youn Sang-ki said, “The designation will be a stepping stone to worldwide promotion of the brand of Hadong’s traditional tea that is traced back to the ancient Korean kingdom of Silla (57 B.C.- A.D. 935).”

According to Youn, Hadong tea has been gaining popularity in and out of South Korea, with the tea supplied to Starbucks Corp. of the United States.

He also stressed the importance of drawing more tourists to the region and establishing tourist facilities in a bid to build the region as a global tourist attraction centering around tea, saying the Shizoka region in Japan has seen visitors increase by more than 50 percent since it obtained GIAHS designation in 2003.

Park Kyung-hee, a senior official at the agriculture ministry, said her ministry is making preparations for the FAO’s on-site inspection of the agricultural methods of Korean ginseng “insam” in Geumsan, a town in South Korea’s central province of South Chungcheong, to decide whether to add it to the list. The inspection could take place as early as the end of this year.