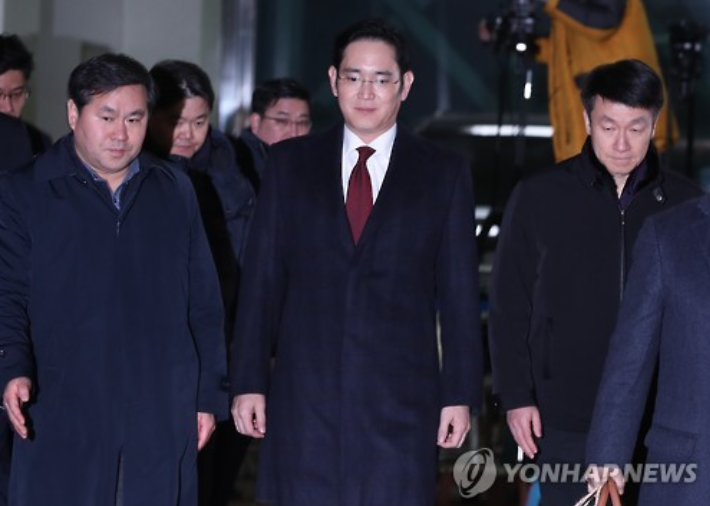 Lee Jae-yong leaves the office of the special prosecution team on January 13, after being interrogated for over 22 hours. (image: Yonhap)

This marks the first time that officials have issued a warrant for a major conglomerate chief implicated in the Choi Soon-sil scandal. Several conglomerate groups have been accused of providing questionable favors to the president’s confidante and her daughter Chung Yoo-ra, who is currently being detained by Danish police.

“Issuing an arrest warrant for vice chairman Lee could have a significant impact on the national economy, but it is more important that justice is served,” said an official during Monday’s press conference.

Lee is accused of providing 43 billion won ($36.4 million) in monetary support to Choi in return for government backing for the controversial merger of two of Samsung affiliates – Samsung C&T and Cheil Industries. The merger was seen as critical for Lee in his consolidation of power within Samsung Group, and was strongly denounced at the time by some investors, most notably the U.S. hedge fund Elliott Management.

The bribery charges included 22 billion won in consulting contracts with Core Sports International, one of Choi’s corporate bodies in Germany; contributing 20.4 billion won to the Mir and K-Sports foundations, two Korean entities also operated by Choi; and 1.63 billion won in funding to the Korea Winter Sports Elite Center, allegedly established by Jang Si-ho, the niece of Choi Soon-sil – all of which the prosecutors say are nothing more than bribery in return for favors.

The prosecution team believes that a portion of the funds were unlawfully withdrawn from corporate coffers, which explains the embezzlement charges.

The perjury charge was added for Lee’s false testimony at a parliamentary hearing on December 12, during which he said he was not aware of the existence of Choi when Samsung gave its support to the organizations that had close ties with the president’s confidante, adding that he expected no compensation for the contributions.

The prosecution believes that Lee was aware of Choi and her daughter in March 2015 at the latest, and started planning a “roadmap” for supporting the family, with circumstantial evidence corroborating its judgement.

Lee has had three closed-door talks with the president over the years. In the second meeting, which took place on July 25, 2015, just after Samsung’s merger deal was successfully approved, President Park allegedly criticized Samsung for its “disappointing” contributions.

The warrant’s validity is expected to be approved by the court on Wednesday. Once approved, investigations into other conglomerates such as SK and Lotte, and the president herself are likely to pick up pace, and the special prosecution will be looking to also charge President Park with bribery. Park is currently facing charges of abuse of power and obstruction of justice.

“We believe that our investigation so far has proved, to a significant extent, that the president and Choi were in a relationship that shared (illicit) gains,” the official added.

In response to the latest development, Samsung made an official statement emphasizing that there was no unlawful solicitation in its contribution to Choi, calling the prosecution’s claim “hard to accept.”

Meanwhile, SK and Lotte are on high alert with the breaking news.

The two companies pledged 11.1 billion won and 4.5 billion won, respectively, to help establish the Mir and K-Sports foundations, with the possibility that the donations were made in exchange for the pardon of SK Chairman Chey Tae-won in 2015 and Lotte’s renewal of its duty free outlet license, also in 2015, although the two companies have refuted the allegations.

Chey and Shin Dong-bin, chairman of Lotte, are said to have been banned from leaving the country along with other conglomerate heads.