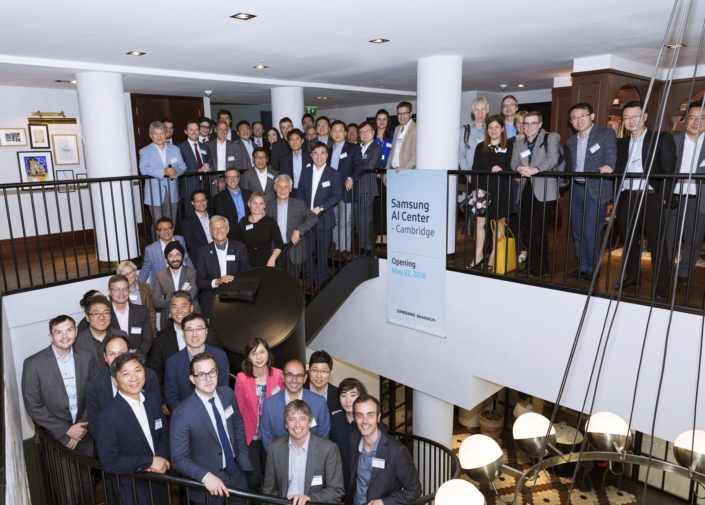 Attendees at the AI Center in Cambridge, the U.K opened on May 22. (image: Samsung Electronics)

SEOUL, May 23 (Korea Bizwire) — Samsung Electronics’ announcement yesterday of plans to operate five AI research and development centers around the world gave industry insiders insight into Vice Chairman Lee Jae-yong’s vision of the future, as Samsung prepares for the next generation of technological advancements.

Experts say that Lee’s most recent global traverse following a year-long hiatus is due to his decision to promote AI as the new engine that will drive Samsung into the future, in the same way that semiconductors, TV products and smartphones did so in previous decades.

Such sentiment was foreshadowed by Lee’s first business trip after his release from prison to Europe and then Canada, where he focused on AI technology.

In November of last year, Samsung set up a new AI Centers in Seoul, opening another in Silicon Valley in January.

As Samsung’s profits in the smartphone and TV sectors remain unchanged, the company’s strategy to seek a new profit source is in the process of materializing.

However, some in the industry say that despite Samsung’s strong will to use AI as fuel to push the company into the future, a late start may dampen its hopes to defeat its global competitors.

Other companies have been investing in AI for many years now. Amazon’s CEO Jeff Bezos, at a conference in 2016 said that the company been researching AI for four years with over 1,000 people working on AI projects.

Meanwhile, Google established an AI research center in China and sought out industry talents later than Amazon, but still much earlier than Samsung’s most recent efforts.

Despite such skepticism, Samsung remains confident that it can accelerate its research in the AI sector just as the former underdog-turned-giant did in the past by taking over its competitors in the fields of semiconductors, TVs and smartphones.

Samsung’s U.K. AI Center in Cambridge will be led by Andrew Blake, previously director of Microsoft’s Cambridge Laboratory and a pioneer in the development of algorithms used in artificial intelligence.

The AI Center in Toronto will be led by Dr. Larry Heck, Senior Vice President of Samsung Research America and an expert in virtual personal assistant technologies.

The company’s AI center in Moscow will be led by AI experts Prof. Dmitry Vetrov and Prof. Victor Lempitsky.