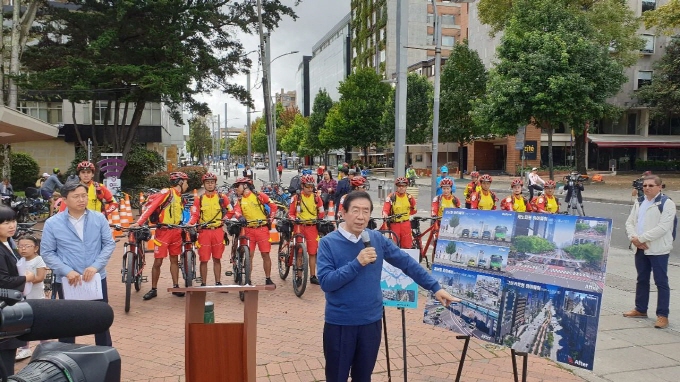 Seoul Mayor Park Won-soon explains his vision for CRT across Seoul during his visit to Bogota, Colombia, on July 14, 2019. (Yonhap)

Mayor Park Won-soon declared his vision for the so-called Cycle Rapid Transit (CRT) for Seoul during his visit to Bogota, the capital of Colombia, which boasts one of the world’s most extensive networks of car-free roads packed with cyclists.

Park, who left Seoul last Monday for a 10-day trip to Mexico and Colombia, said he drew inspiration for CRT from Bogota’s “ciclovia” touted as one of the world’s most successful permanent bike paths.

“I’ll create a people-centered bike revolution by building bicycle highways throughout Seoul,” Park told reporters during a tour of ciclovia.

“The existing bike paths are an unstable space that adjoins car roadways. But the CRT will be physically separated from cars and pedestrians. It’s a space exclusively dedicated to bikes,” the mayor said.

He said CRT networks will be built above bus-only lanes or along Han River bridges or other existing urban facilities in tubes or other forms.

The existing bike-only lanes on major car roadways will be elevated to the level of sidewalks.

“Bicycle-centered and human-centered traffic is a big vision and movement across the world,” the mayor said. “We don’t have to hesitate, as the definition of human-oriented roads has been made clear.”