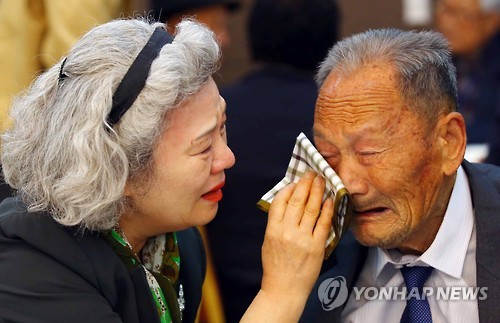 South Korean Lee Jung-sook (L) with a handkerchief wiping away the tears of her father Lee Heung-jong from North Korea at family reunions. (image: Yonhap)

SEOUL, Jul. 26 (Korea Bizwire) — Chung Wang-ok, 78, never thought that he would not be able to see his eldest brother again when his sibling was forcibly enlisted and taken by North Korea’s army during the 1950-53 Korean War.

It was not a temporary farewell, but a decades-long painful wait with no promise of reunion as the devastating conflict left South and North Korea technically at war.

Chung said that he spared no effort to find the brother’s whereabouts and applied for state-arranged separated family reunions, but to no avail.

“I would like to know whether he is alive or not. My mother died about 20 years ago while missing him so much,” he said. “How can I express the depth of sorrow that stems from the tragedy of having to live separately from beloved ones?”

Chung is among some 60,500 surviving elderly South Koreans torn apart by the war, which ended in a truce, not a peace treaty.

The issue of separated families is highly emotional and the most urgent humanitarian matter for the two Koreas, as more aging Koreans have passed away without a chance of meeting with their relatives on the opposite side across the tense inter-Korean border.

An estimated 131,200 dispersed family members are on a waiting list for reunion events, of which about 54 percent died as of end-June, according to data by Seoul’s unification ministry and the Korean Red Cross.

It showed that 62.6 percent of South Koreans hoping for reunions are aged over 80, pointing to the urgency of holding family events.

Liberal President Moon Jae-in vowed a stern response to North Korea’s nuclear and missile provocations. But he is also seeking dialogue with the North, placing top priority on resolving this issue on humanitarian grounds.

The South hopes to hold reunions on Oct. 4, Korea’s lunar fall harvest holiday and the 10th anniversary of the second inter-Korean summit.

But a deadline for the military talks has passed with North Korea’s silence, while Pyongyang has yet to respond to Seoul’s offer for family reunions talks.

He is hoping to meet with his elder brother and two older sisters in North Korea with whom he had to part due to the war.

“I am awaiting possible reunions with a mixture of hope and frustration. …I hope the Red Cross talks can be held in August as scheduled,” Kim said.

But the outlook for imminent family reunions remains murky as the North is trying to politicize the issue, experts say.

The North has claimed that they were lured and kidnapped by Seoul’s spy agency, but the South said that they chose the defection on their own free will. 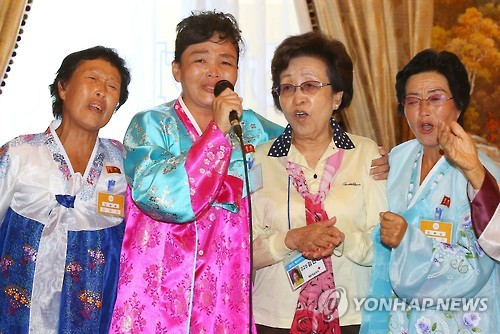 Separated South and North Korean families singing the song “Our wish is unification” together at family reunions. (image: Yonhap)

Separated families voiced hope that it is more urgent to identify whether their family members in the North are alive.

Nearly eight out of 10 divided South Korean families said the top priority should be placed on confirming their kin’s fate, according to a 2016 survey by he Ministry of Unification in charge of inter-Korean affairs.

Holding family reunions on a regular basis ranked second with 10.3 percent, followed by exchanges of letters with 4 percent, the poll said.

Since 1985, the two Koreas have held 20 rounds of face-to-face reunion events involving only some 19,800 family members from both sides. The last one was held in October 2015 at a facility on Mount Kumgang on North Korea’s east coast.

In 2005-2007, video-based reunions were held on seven occasions, enabling about 3,750 people to see their long-lost relatives, according to the ministry.

South Korea has called for family reunions on a regular basis, urging the North to allow them to exchange letters at least. But Pyongyang has not responded to Seoul’s call.

“One-off reunions involving some 100 families from each side are insufficient to heal the suffering of divided families. Not much time is left for them,” said Shim Goo-seob, who leads a private group of separated families in the South.

“The government should explore ways to confirm the separated families’ fate in North Korea. Exchanges of letters or postcards need to be permitted,” he said. “Resuming video-based reunions will be a good idea as they make it possible for a larger number of families to see their relatives.”

South Korea said that it has conducted DNA tests on dispersed families and set up a database on their gene information so that it can be used after their death.

The move is aimed at identifying the blood relationship and potentially being used in inheritance or other legal disputes.

It has also made 10-minute video messages from around 18,000 people that contain their wishes for reunions and their personal stories. Seoul hopes to deliver them to their relatives in the North.

“We plan to add about 1,500 video messages this year,” said an official at the Korean Red Cross.

Despite the tricky situation, separated families are not losing a thread of hope for meeting with their kin on expectations that inter-Korean ties will improve under Moon’s government.

“I am only expecting a miracle, as I’ve done what I can do,” said Chung, a separated family member. “I hope that the government can do its best. I wish that I could know my brother’s fate.”