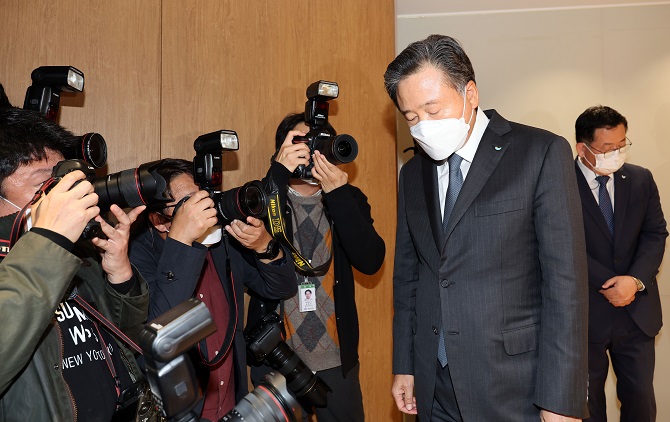 SPC Group Chairman Heo Young-in leaves a room after a news conference at the group’s headquarters in southern Seoul on Oct. 21, 2022. (Yonhap)

SEOUL, Oct. 21 (Korea Bizwire) — SPC Group chairman apologized Friday for the death of a young worker at a bread-making factory amid a boycott campaign against the South Korean food and beverage giant.

The 23-year old employee was killed on Saturday after her upper body was caught in a sauce mixer at the factory affiliated with the group in Pyeongtaek, 65 kilometers south of Seoul.

“I would like to express my apology to the deceased and the bereaved family. We feel greatly responsible for the accident and will humbly take any criticism from the public,” said chairman Heo Young-in at a news conference at the group’s headquarters in southern Seoul.

“We also found out that staffers resumed work near where the accident occurred. This was not right, and an act that should not be justified for any reason,” he said in regard to news reports that the group resumed operations at the factory a day after the incident. 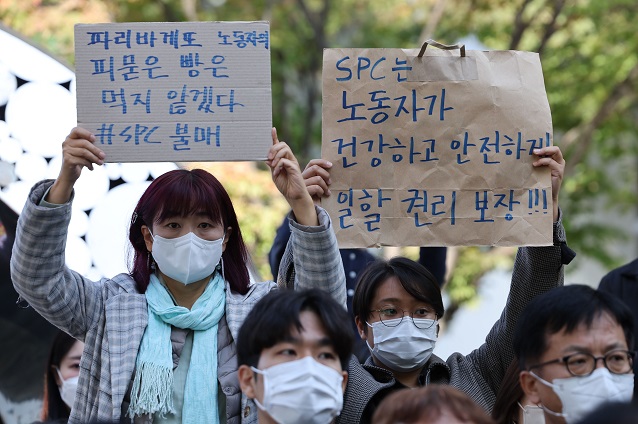 People gather in front of the headquarters of food and beverage giant SPC Group in Seoul on Oct. 20, 2022, to pay their respects to a 23-year-old worker killed in an accident at a bread making factory of the group on Oct. 15. (Yonhap)

The latest apology came four days after Heo issued a written one over the death of the worker.

The group, which also runs the Paris Baguette bakery chain and Shake Shack burger joints, vowed to invest 100 billion won (US$69.7 million) over the next three years in automation of production, increasing safety facilities and enhancement of internal systems to prevent similar incidents from recurring.

“We will strengthen our safety systems and promise to make efforts to commit to safety in our business,” said Hwang Jae-bok, CEO of SPC Group.

The accident was a hot-button topic in the National Assembly with President Yoon Suk-yeol instructing officials Thursday to determine the exact circumstances and whether there were any “structural problems” involved.

The labor ministry and police raided the SPC affiliate later the same day.

A boycott movement of SPC group brands has been growing online, led by young Koreans furious over a local news report that said the group ordered employees to work at the factory in question a day after the accident.

Social media users have been sharing logo images of restaurants and bakery brands owned by the group and have urged others to stop purchasing their products.