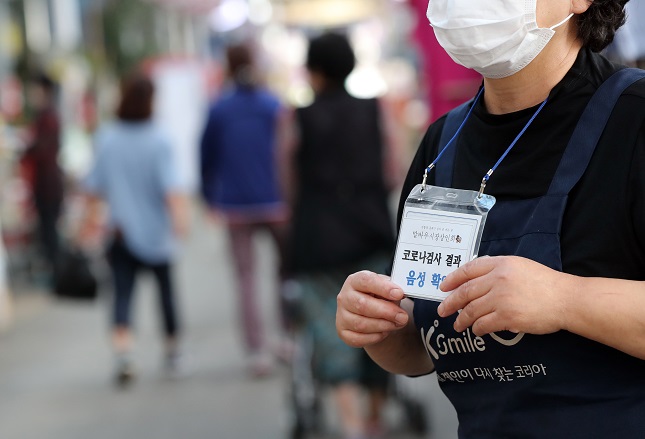 A shopkeeper at a traditional bazaar in Gwangju, 330 kilometers south of Seoul, wears a sign informing customers that she has tested negative for the new coronavirus on Sept. 12, 2020, after the market was closed for two days due to COVID-19 cases reported nearby. (Yonhap)

SEOUL, Sept. 14 (Korea Bizwire) – Only one out of 1,440 people has antibodies for the new coronavirus in South Korea, a second round of antibody tests in the country showed Monday, reinforcing the notion that the nation’s aggressive containment efforts might have curbed the prevalence of the virus.

The result also indicated that herd immunity, which refers to a scenario where enough people in a community develop immunity to an infection so that the infection stops spreading, is impossible in South Korea, according to the Korea Disease Control and Prevention Agency (KDCA).

The KDCA said containment efforts are the only way to slow the spread of the virus until an effective vaccine is available.

Experts have also said it is common for people who tested positive for the virus but did not show symptoms to lose their immunity.

The second serology tests were conducted on the 1,440 people in 13 major cities and provinces between June 10 and Aug. 13.

Jeong Eun-kyeong, head of KDCA, cautioned against reading too much into the results of fresh antibody tests, saying that the data is not sufficient to guess the real number of coronavirus patients with no symptoms.

Jeong said in a briefing that the number of people who joined serology tests is too small, given the nation’s total caseload of over 22,000.

The second round of tests was also conducted before a new wave of infections gripped the greater Seoul area in mid-August, Jeong said.

KDCA said it will conduct more serology tests with blood samples taken between late September and early October to analyze the spread of the virus in the greater Seoul area.

KDCA said it will continue to conduct serology tests every two months, including another round of tests on 10,000 people.

In July, the KDCA found that only one out of 3,055 people tested positive for coronavirus antibodies in South Korea.

However, the first test did not cover people in the southeastern city of Daegu, once the nation’s virus hotspot. The second test included 145 people living in Daegu.

The antibody rate in South Korea is extremely low, compared with other nations and cities. New York of the United States had a rate of 24.7 percent, London with 17 percent and Stockholm with 7.3 percent.

Serology tests are known to be in use in Europe, the U.S., Japan and other advanced nations to figure out how many people have been infected with the potentially deadly virus.

South Korea added 109 more COVID-19 cases, including 98 local infections, on Monday, raising the total caseload to 22,285, according to the KDCA.