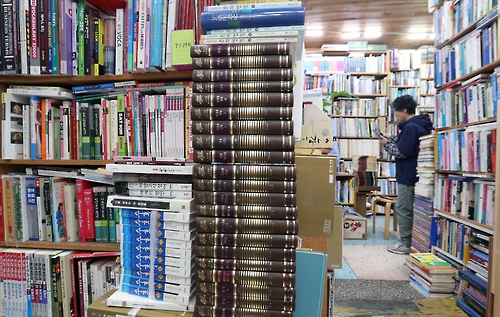 SEOUL, March 6 (Korea Bizwire) — The popular South Korean TV series ‘Guardian: The Lonely and Great God’ has sparked interest in secondhand bookshops, a business previously thought to be fast going out of fashion.

Visitors are flocking in droves to the Secondhand Book Alley at Baedari in Incheon, ever since it became a prime location for South Korean cable TV channel TvN’s successful TV series.

The recent popularity of the Baedari Bookstore Alley as a tourist spot was made possible when the writer behind the show Kim Eun-sook discovered Hanmi Bookstore by coincidence, one of the few remaining book sellers that now enjoys a great deal of popularity with the fans of the show.

Hanmi Bookstore owner Jang Won-hyek is hopeful for the future of his business.

“The number of visitors to my shop on the weekend has soared more than tenfold since the show aired. I also see foreign tourists often,” he said in an interview with Focusnews back in January.

“This bustling street once used to be full of people with banks and cinemas until people stopped coming. I’m expecting that this show ‘Guardian’ will have a positive impact on our community and help things change.”

However, it’s not all roses for the now famous secondhand bookstore alley. While the show did help revamp the image of the area, most visitors tend to just take photographs and walk around without buying a book that would financially support the local businesses.

Reduced to rubble during the Korean War, a group of merchants started selling books from a cart in 1953 at Baedari. By 1960, there were nearly 40 of secondhand bookstores. Today, only five remain.

South Korean secondhand bookstores peaked in the ‘70s and ‘80s but their numbers began to decline with the introduction of online bookstores.

In the southern port city of Busan, a street in Bosu-dong famous for hosting more than 50 secondhand bookstores is facing a similar situation to the Baedari Bookstore Alley, but with a different approach.

Under pressure of gentrification and competition with online booksellers, vendors fought back by building their own online store and teaming up to establish a a co-operative.

As secondhand bookstore streets are proving to be beneficial for local tourism, cities like Busan and Incheon are coming up with plans to secure the existence of historical bookstores.

Busan Metropolitan City is considering plans to connect secondhand bookstores allies to other tourist attractions in the city.

The Incheon City Council has issued a local ordinance in support of old bookstores with cultural values, which will see local business owners get help from their local government every three years.