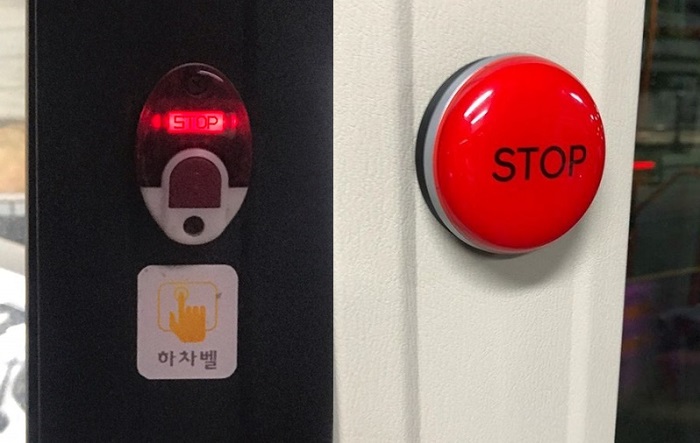 In the past, there was a sticker underneath the button that said the same thing in Korean and a picture of a finger pointing to a button (L). The new button (R) had no sign or explanation. (image: Yonhap)

SEOUL, Feb. 1 (Korea Bizwire) — An elder was riding a city bus in Seoul recently and saw a very questionable sign. What he saw was a bus stop sign that said ‘STOP’ in English.

In the past, there was a sticker underneath the button that said the same thing in Korean and a picture of a finger pointing to a button. The new button had no sign or explanation.

This elder retired from work as a public official and was quite comfortable reading simple English words such as ‘stop’. However, he was uneasy thinking of other elders of his age without any knowledge of English.

Furthermore, he expressed frustration at having to use the English alphabet in daily life along with the verbal use of English.

On this matter, the Seoul Bus Policy Team released an official statement on January 31.

The team was unaware that some of the new buses had stop signs in English only, and announced that they would find a way to deal with the situation if they thought it was necessary.

When new signs were put in, there were both English and Korean signs that were supposed to be placed together.

However, some of the Korean signs have been omitted, but there was no comment on what should be done about the matter.

Similar to the stop signs, it is common to see many objects labeled in English only.

The fundamental cause of such change is due to increasing proficiency in English for the general public, and the use of mixed language in society.

Sometimes, English is used simply because it looks pretty and better or because we are living in a global society. However, the consequence of neglecting Korean is not that simple.

So-called “Korea Grandma”, a popular YouTube creator whose real name is Park Mak-rye, recently posted a video of herself ordering a hamburger with an automated machine.

The machine itself was difficult to operate and instructions were written in a tiny font.

To make the matter worse, there was an English sign that read ‘Please select your language’ without Korean written underneath.

While it is very common to see English in daily life, some Koreans are filing complaints prompting the government to regulate the use of English.

To this, a government official expressed sympathy for those who had difficulty understanding English signs, saying that Koreans are exposed to English without the help of Korean underneath.

The official further announced that if English had to be used for the purpose of beauty and comfort, it should be used together with Korean.