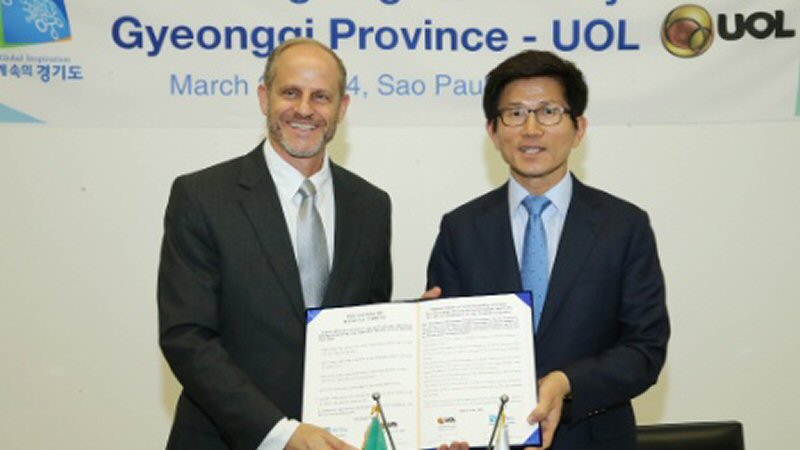 “South Korea’s Gyeonggi Province is a power-house of online entertainment and games, which now comprise about 60 percent of all cultural exports from Korea,” said Marcelo Epstejn, CEO of UOL. “We’re looking forward to supporting the growth of Gyeonggi Province in Brazil and providing Brazilians with outstanding online content the South Korean market is known for.”

Gyeonggi is the largest province in the South Korea, amounting to more than half of the population. This MOU will help companies that operate within that province to expand to Brazil through UOL Group, and identify areas for mutually beneficial cooperation that will foster stronger ties in entertainment and online gaming.

The South Korean Province’s major game developers are among the largest in the world, establishing the market as a natural partner for Brazil, which is the fourth largest online games market. UOL is synonymous with the internet in the country and now holds 65 percent of the online games business through its digital monetization and publishing divisions, BoaCompra and Gamérica. As South Korea’s local game market is fairly saturated, major local game developers, such as NCSoft, SmileGate and CJ, will benefit from Gyeonggi Province’s investment in marketing, taxes and local services.

Universo Online (UOL) (http://www.uol.com.br) is the leading internet services and online content company in Brazil. It reaches more than 6.7 billion monthly page-views, according to Omniture. Its home page receives more than 50 million unique visitors per month. It is a pioneer in the Brazilian Internet industry, offering the widest Portuguese online content and has more than 1,000 news, information, entertainment and service channels. It has the largest online platform of products and services in advertising, mobile services, electronic online payment (PagSeguro, BoaCompra), e-commerce (Shopping UOL, TodaOferta), hosting, infrastructure and online security services (UOL Host and UOLDIVEO).