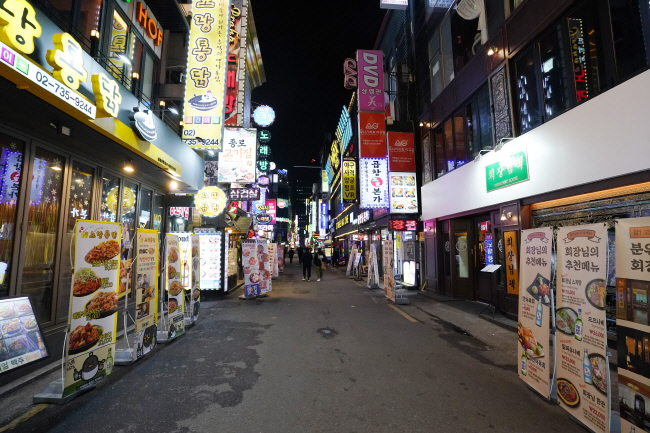 A street in Jongno, one of the busiest districts in Seoul, is mostly empty on March 4, 2020, amid concerns over the new coronavirus. (Yonhap)

SEOUL, March 9 (Korea Bizwire) — The outbreak of the new coronavirus here may further undermine South Korea’s economic growth if it is lasts for a significant amount of time, reports suggested Monday, while some said the virus may already have nearly halved the country’s economic growth.

“Household spending in Japan and Korea are set to weaken further and slower growth in the U.S. and Europe will add to external headwinds,” S&P Global Ratings said in an article titled “COVID-19 Now Threatens More Damage to Asia-Pacific.”

The credit ratings agency said the economic damage from the virus outbreak may reach as high as US$211 billion in the Asia-Pacific region alone.

“Local coronavirus transmission in Japan and Korea add a new, highly uncertain dimension to problems in these economies … We now anticipate Japan’s economy to contract 0.4 percent and Korea’s growth to slow to 1.1 percent,” the report said.

Such an outlook apparently reflects a view the COVID-19 outbreak in China will again limit South Korea’s exports.

Seoul’s outbound shipments dropped for 14 consecutive months between December 2018 and January amid a prolonged slump in global chip prices and the trade dispute between the United States and China — the world’s biggest economies and the largest importers of South Korean goods.

Another global ratings agency, Moody’s Investors Service, also reduced its growth outlook for South Korea on Monday to 1.4 percent from the previous 1.9 percent.

It also marked the second downward revision in less than a month. The global ratings agency had slashed its growth estimate for South Korea from 2.1 percent on Feb. 16.

“Since the publication of our last Global Macro Outlook update in mid-February, the coronavirus outbreak has spread rapidly outside China to a number of major economies, including Korea,” Moody’s said in its report, titled Macro Global Outlook, released Monday.

“Previously, we assessed the effects of the virus mainly on aggregate demand in China, global travel and global factory output resulting from disruptions in supply chains through East Asia,” it added.

“It is now clear that the shock will additionally dampen domestic demand globally, which will affect a wide range of non-traded activities across countries and regions simultaneously.” 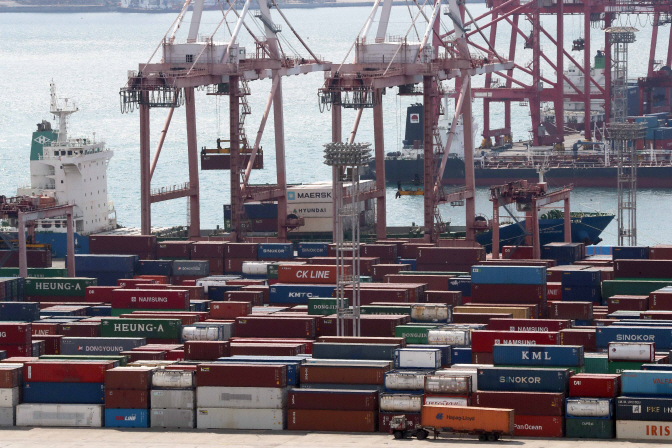 Many agencies too have cut their growth outlooks for the local economy.

The Bank of Korea has slashed its growth estimate for the local economy to 2.1 percent from the previous 2.3 percent.

Others, however, paint a much gloomier outlook for Asia’s fourth-largest economy.

The Asian Development Bank (ADB) has claimed South Korea’s gross domestic product (GDP) may shrink by up to $16.5 billion this year in the worst possible scenario.

The amount accounts for nearly 1 percent of the country’s GDP. The ADB said the worst possible scenario is when the outbreak lasts more than three months here and causes a downturn in China’s consumption for more than six months.

South Korea has been facing an uphill battle since reporting its first confirmed case on Jan. 20, with the total number of infection cases coming to more than 7,300 as of Sunday.

However, in a possible sign of containment, the number of new infection cases has been on a steady decline recently, falling to below 400 per day for the first time in 11 days on Saturday.