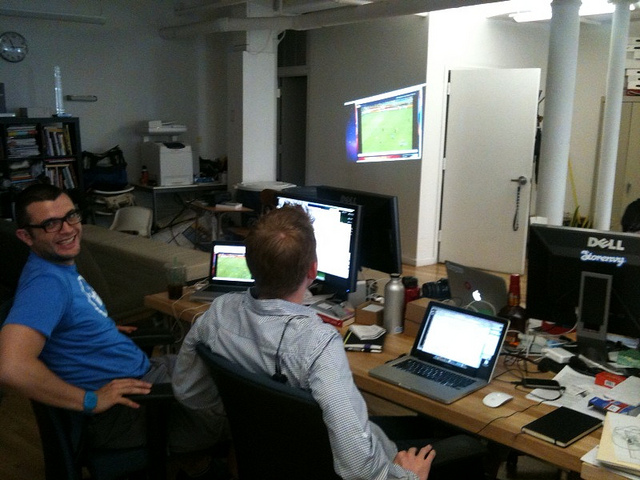 LEXINGTON, Mass. June 26, 2014 (Korea Bizwire)–A survey commissioned by Ipswitch  revealed that U.S. workers streaming media to watch the World Cup is a  serious wireless network bandwidth drain and network management  challenge that can have negative implications for critical business  applications and overall productivity. Ipswitch polled more than 200 IT  professionals in the U.S. to further understand how the most viewed  sporting event on the planet – the FIFA World Cup – is affecting their  company’s network performance and overall business operations.

According to the  Ipswitch survey, approximately two out of three IT admins (67  percent) are currently experiencing IT problems and network management  headaches that can be directly tied to employees streaming the World Cup  across their organization’s wireless network. Of those, 70 percent say  that the video streaming of matches is having an adverse effect on  employee productivity, network and application performance and overall  business operations.

“The World Cup has clearly become more popular than ever in the U.S.,  both at home and at the office,” says Ennio Carboni, executive vice  president, customer solutions, Ipswitch. “Today’s midday match between  the United States and Germany has the potential to create one of the  biggest Wi-Fi traffic spikes in IT management history. And as a result,  worker and application productivity may take a hit, while the  hard-working IT professionals may unfairly get the equivalent of an  orange card for network management.”

The research disclosed some startling information about the readiness of  organizations to deal with large scale events such as the World Cup.  Despite evidence from earlier this year proving that high-profile events  such as the  Winter Olympics in Sochi and the  NCAA March Madness basketball tournament caused disruptions to  critical business operations, only slightly more than half of  respondents (53 percent) indicated that they had a proactive network  management plan in place to deal with the high bandwidth spikes. Those  who had a plan in place were mostly concerned with monitoring or  limiting streaming activity. Setting threshold alarms was the most  common tactic, with 71 percent of respondents using this technique,  while monitoring top applications and blocking certain websites received  nearly 60 percent each. Somewhat surprisingly, encouraging employees to  view the World Cup from a centralized location was a part of the plan  for only 32 percent of respondents.

Desktop and laptop computers were the most common devices used by  employees to stream World Cup matches at nearly 90 percent. Smartphones  were not far behind at 83 percent, with tablets showing less popularity  at 65 percent.

As to whether or not they have a personal interest in the World Cup,  less than half of those polled (45 percent) were following the action.

Know what is happening on your wireless network

During the World Cup tournament and beyond, IT professionals can take  proactive steps to avoid fielding a barrage of support calls from upset  users experiencing slow application performance. With a wireless  and wired network monitoring solution run from a single dashboard,  IT professionals can get the means to gain back control, including:

The Ipswitch World Cup survey was taken by 207 IT network professionals  across the U.S. between June 16 and June 20, 2014. For the full survey  findings visit: http://www.whatsupgold.com/resources/press-releases/Ipswitch-World-Cup-Survey-Report-Summary.pdf.

Ipswitch helps solve complex IT problems with simple solutions. The  company’s software is trusted by millions of people worldwide to  transfer files between systems, business partners and customers; and to  monitor networks, applications and servers. Ipswitch was founded in 1991  and is based in Lexington, Massachusetts with offices throughout the  U.S., Europe and Asia. For more information, visit www.ipswitch.com.