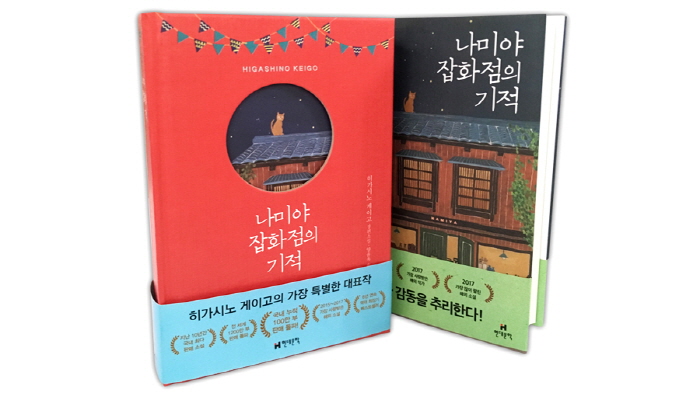 SEOUL, Jul. 26 (Korea Bizwire) — Over 1 million copies of the hit novel “Miracles of the Namiya General Store” by Japanese writer Keigo Higashino have been sold in South Korea.

The novel’s local publisher Hyundae Munhak revealed yesterday that the total number of copies sold in the nation surpassed the 1 million mark, and when including sales of the book’s electronic version, over 1.2 million copies have been sold thus far.

The novel was originally published in March of 2012 in Japan and was released in Korea in December of the same year, though at the time, the 456-page novel did not garner much attention domestically.

However, the book’s popularity grew steadily through word of mouth with the novel eventually making it onto the bestseller’s list after five years.

It was also the best-selling novel over the last 10 years in Korea and broke records as the first book to be ranked among the top 10 bestsellers for five consecutive years in an annual survey by Kyobo, one of the largest bookstore chains in South Korea.

Having been inspired by the novel in which letters asking for advice are posted to the Namiya General Store, fans of the story have been setting up mail boxes in public areas to mimic the novel, while yet others have exchanged advice via smartphone applications.

The novel has also been received very positively by men and women of all ages in South Korea.

According to the National Library of Korea, the novel was the top borrowed book for readers in their 20s, second most popular book for people in their 40s, third for those in their 30s, and fourth for teenagers.

The local publisher said that the writer, Keigo, rarely conducts interviews and does not participate in other promotional activities outside of his writing, but when he heard that over 1 million books were sold in Korea, he thanked his Korean fans through his agent.

The publisher has released a special edition commemorating the 1 million copies sold in South Korea, which is being sold at bookstores for 14,800 won a copy.