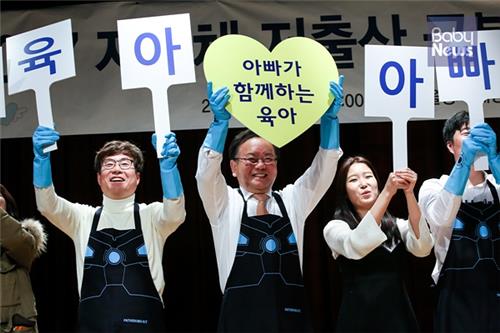 SEOUL, July 25 (Korea Bizwire) – Growing up, Kim Hye-joon longed for a nurturing paternal figure that his own failed to give.

His father, deeply patriarchal and inflexible, rarely tried to listen to his son and punished more often than he communicated.

Now the father of a daughter in her 20s, for the past several years Kim has been leading a civic group that aims to change the deep-rooted bias in Korea that fathers ought to focus on their roles as breadwinners and stay out of child-rearing.

“Since I became a father, I’ve noticed that there is a culture in which you are a good father when you bring home a load of money. It wasn’t easy to raise my kid according to what I believed was right,” Kim told Yonhap News Agency in a phone interview on Monday.

Kim’s group, “Involved Fathers in Korea,” has run a variety of social awareness campaigns. One of the most important activities, he said, is to get CEOs and other leaders of society committed to working toward changing the social and corporate systems to be more family-friendly.

“Even if fathers want to change, they can’t unless their companies help them change. When the leadership changes their thoughts and supports work-life balance, it will get a lot easier,” he said.

Faced with a critically low birth rate, the government has been trying to lessen the child care burden on mothers — a significant reason that many women drop out of the job market or forego childbirth — and help fathers do more.

As part of the efforts, the government introduced a 52-hour working week system on July 1, which bans employees of companies with more than 300 workers, public institutions and government offices, from working over 52 hours per week. A business owner can face up to two years in prison or a fine of up to 20 million won (US$17,945) for not following the regulation.

“As Korean fathers are at the center of the society’s mega-trend of shortened working hours and the pursuit of work-life balance, we need to help them change their perceptions about fatherhood and get them to act differently,” Kim emphasized.

The change, he also pointed out, is necessary for fathers to live their lives more fully and happily in the changing modern world, where old-fashioned or sexist approaches to child care are increasingly dismissed as uncool and hands-on dads are becoming more cherished.

Park Se-won, who is the father of two young daughters and works at one of the country’s biggest information technology companies, agreed.

“My father’s generation tended not to talk about work and considered reticence a virtue and doing housework not manly. But for me, connecting with my family is very important,” the 44-year-old said, adding that it is not only for his family’s happiness but for his own.

Feeling the country is moving away from the traditional fatherhood represented by “heavy responsibilities and authoritative leadership,” he said young fathers like himself now are required to do more in child care and housework and better communicate with family.

For some men, hands-off fatherhood of the past seemed inevitable, to some degree, when fathers were expected to lead South Korea’s rapid industrialization and economic growth in the 70s and 80s.

“I think he didn’t know how to spend his spare time or play with his children. He only believed that focusing on work to provide was the best way to become a good father.”

A father of two young boys, Cho believes being a good dad means spending time with the kids, doing physical activities together and taking family trips as much as possible.

“For little ones, you have to physically play with them, where a dad’s role is important. When you do that, you get to better understand their characters, feelings and behavior.”

“Child-rearing is actually more fun than you might expect.” 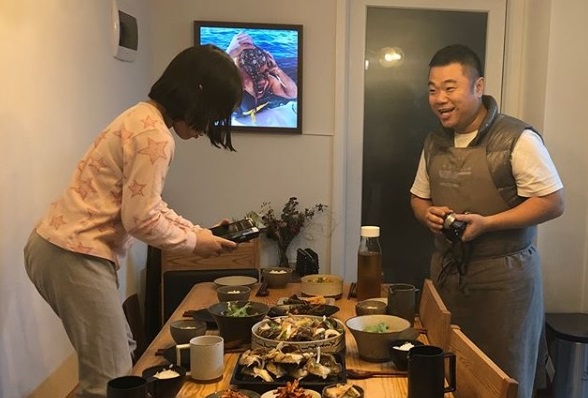 Popular comedian Jeong Jong-chul, better known in Korea by his TV character “Okdongja,” ends his day in bed, thinking about what to cook for breakfast for his three elementary-school-aged kids and his wife.

Nicknamed “Housewife Ok,” he is an Instagram star with more than 116,000 followers. That audience is drawn not to his talent for making people laugh, but more to his unpretentious chronicling of daily life and sharing of tips about cooking and household chores.

Confessing that he “used to be a typical Korean man” who thinks housework is a woman’s domain, he was jolted into seeing things differently when his wife, suffering from depression, left a grim note for him several years ago, in which she said she found no joy or purpose in life.

After the letter, he stopped appearing on TV comedy shows and stayed at home with his wife to protect her.

“In the beginning, I didn’t know what to talk to her about because we didn’t have much in common. I tried to find mutual interests and thought about food,” he said in an interview at his office in central Seoul on Monday.

“Before going to bed, we talked about what to cook the next day. The next morning, we prepared and made food together and slowly opened up toward each other. As I saw her laughing, I felt so happy and got more into cooking for her.”

He advised other Korean men not to think that they should divide up housework.

“Division of work is what you do at your workplace. If you don’t do certain housework simply because it is not what you agreed to do, it can cause tension with your partner,” he said. “Just do it if you can so that your loved one can rest. It is the biggest reward that you can get.”

His kids, who have enjoyed their dad’s cooking since they were very little, wake him, not their mom, up for breakfast, he said. “My kids are curious why other dads don’t wear an apron or why those dads lie on a couch watching TV all day. I feel happy when they say I am their role model,” he said.

“I can’t be a perfect dad, but I want to be a father who they think always does his best for them and is there for them.”